At its Nov. 12 meeting, the Sunnyvale City Council approved a Council district map and election sequencing for the six districts.

The proposed map and election sequencing will be part of the charter change that Sunnyvale residents will be voting on in March 2020. On Dec. 6, the Council will formally approve the measure that will appear on the ballot.

In a 6-0 vote, with Council Member Michael Goldman abstaining. The Council chose Map 120D (tinyurl.com/sunnyvale-maps). Council Members preferred that map because, they said, the districts were largely compact, the boundaries easy to understand and correlated with certain communities of interest, such as school districts.

“I think 120D provides everything we’re trying to accomplish [to comply] with all of the requirements with the CVRA,” said Council Member Glenn Hendricks. 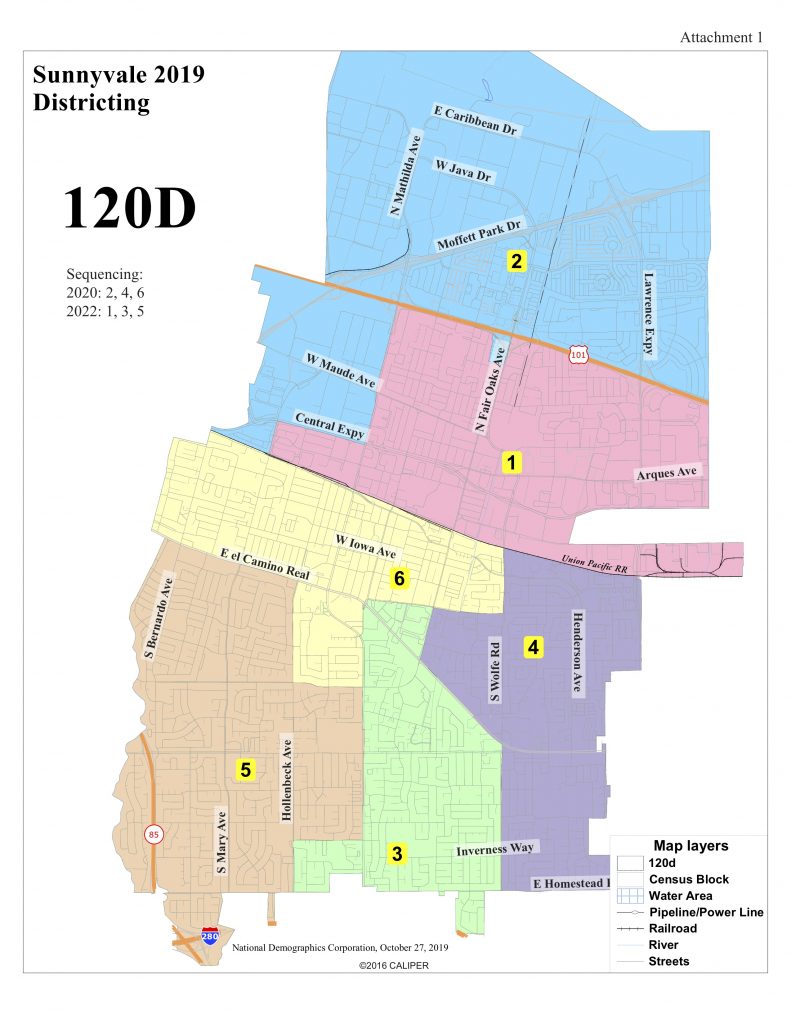 Although Goldman preferred another map, he said, “I understand where the … [map] is coming from in terms of communities of interest and school districts.”

The directly elected mayor proposal that will be part of the six-district ballot question continues to be prominent in the discussion.

Opponents of a directly elected Sunnyvale mayor or of the combining of the two proposals in the March ballot measure, have been a visible presence at Council meetings.

At the opening of the meeting, one resident specifically directed remarks at Goldman, who is a member of No Directly Elected Sunnyvale Mayor’s steering committee, expressing “disappointment” of his endorsing what this resident regarded was misinformation about the likely consequences of the ballot measure failing.

It was “inaccurate” and “false” and “dishonest” to say, as No Directly Elected Sunnyvale Mayor has in its communications, that if the six-plus-one proposal loses that the City would nonetheless adopt by-district Council elections.

“If the March charter amendment fails there is no guarantee we adopt [this] solution,” the speaker continued. “The plaintiffs have already indicated they are satisfied a six-plus-one solution will satisfy the CVRA,”

“I completely support district elections,” said resident Josh Grossman who is part of the No Directly Elected committee. “I think it’s a wonderful transition we’re making … However, adding a directly elected mayor … really confuses the issue.”

If seven districts were on that ballot, Grossman said, the Council would be united “pounding pavement” to pass that change to districts “by acclamation” and there wouldn’t be a No Directly Elected campaign.

City Politics
Author Carolyn SchukPosted on November 25, 2022November 27, 2022
Earlier this month there was a flurry of consternation when a council member’s ballot was rejected because of a signature discrepancy, and mutterings about...

City Politics
Author David AlexanderPosted on November 18, 2022
It was almost paint-by-numbers during a Santa Clara City Council meeting responding to findings of the civil grand jury report that alleged the Council...
SPONSORED