At its Dec. 11 meeting, the Sunnyvale City Council meeting voted 6-1, with Michael Goldman dissenting, to move ahead with a plan from PlaceWorks, Inc. for transitioning to a single-member by-district system for electing its City Council, and made a $333,000 appropriation for the effort.

Goldman’s objection was not to the change — he just wanted an accelerated schedule for it; namely via a Council ordinance without a referendum (specifically allowed by state law) and an appropriately reduced budget in keeping with that.

There was almost no dispute in the Council Chambers last week toward the City’s wisest course was to institute single-member Council districts. Instead, the discussion concerned the process and schedule for reaching that goal, and whether other changes to the Sunnyvale City Charter should be considered at the same time as the election system.

In early September, the Sunnyvale Council held a public hearing about changing from the current at-large, by-seat election system for electing Council members to a by-district system and began work on a transition plan, hiring public outreach consultant, PlaceWorks Inc., to assist the City. The Citizens Advisory Committee (CAC) will be appointed by the new Council when it is seated in January.

About a month after this effort began, Sunnyvale received a notice from attorney Laura Ho of Goldstein, Borgen, Dardarian & Ho, alleging that the City’s at-large election system violates the California Voting Rights Act (CVRA) because it “dilutes the voting power of Asian American voters.” Cities with single-member council election districts can’t be sued under the CVRA.

On Nov. 20, 2018, the Sunnyvale Council adopted a resolution of intent to change to district-based elections to take advantage of a 90-day “safe harbor” from lawsuits offered by state law (Elections Code 10010) to allow them to adopt an ordinance for by-district elections. 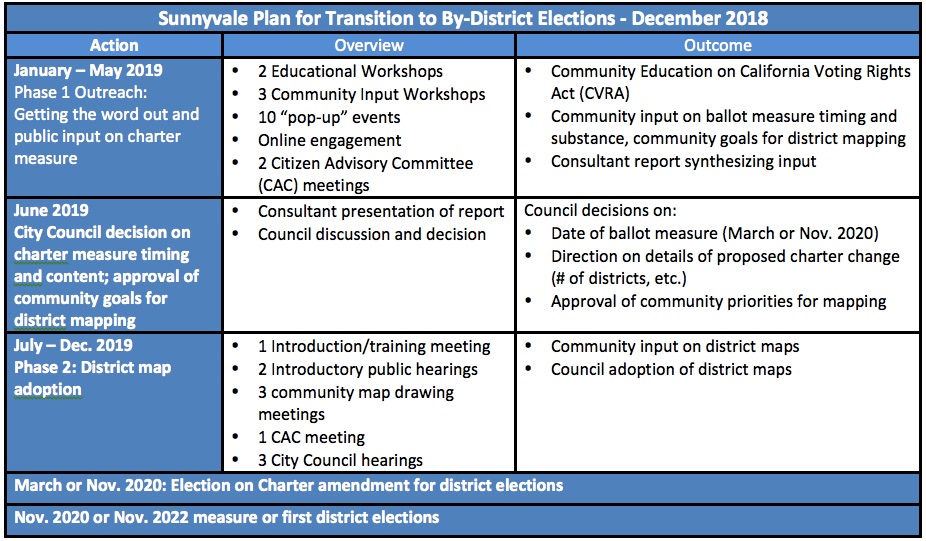 The only choice facing the City was implementing single-member districts voluntarily or having them imposed by a court, Goldman said. That being the case the Council should do it by ordinance (allowed by Government Code 34886) to prevent the possibility of a lawsuit and ensure that Sunnyvale’s 2020 council election will be by-district.

“We are going to district elections,” he said. “The only education should be around why that is. I’m not against education. I’m against provoking a lawsuit.”

Council Member Jim Griffiths sounded a cautionary note about making charter changes by ordinance. One of Sunnyvale’s failed referendums on instituting a directly elected mayor, he said, “was put on the ballot on a 4-3 vote. It was poorly considered. I don’t want to repeat that.”

Other Council Members defended the plan under consideration saying that while Goldman had stated the plain facts, a broad program of education and discussion was needed to educate people about CVRA and its requirements for resident engagement in developing the districting map.

“Effective public policy is not made by telling people what they have to do, but by making them understand the issue and the law,” said PlaceWorks principal David Early.

“It doesn’t work if the community doesn’t understand how we got there,” said Council Member Gustav Larsson.

The time was needed, said Mayor Glenn Hendricks, “to reach the people who aren’t here. We do have to make a decision on the date of the election, but that’s not on the agenda [tonight]. The journey of how we communicate and engage is important.”

Two-Phase Plan For Transition, Priority of District Elections in Nov. 2020

PlaceWork’s plan has two phases. The first is outreach to inform residents about the CVRA’s requirements, the change to a by-district election system and to invite resident input on “the timing of placing the charter amendment on the ballot, number of districts, and related election issues.” The second phase is legally required public meetings about drawing the district maps.

The sticking point of this plan, and the subject of much discussion last week, is that the outreach plan extends beyond the 90-day safe harbor.

This risks exposing Sunnyvale to a lawsuit and its associated costs — defendants in CVRA lawsuits are liable for plaintiffs’ costs once a lawsuit is filed, even if a settlement is reached out of court. The plan sets June 2019 as the decision point.

“By the measure of getting in sync with the CVRA and avoiding a lawsuit, [the plan] is a failure,” said resident Josh Grossman, “but that’s easily remedied. Please don’t gamble with taxpayer dollars.”

More concerning to some was that the plan leaves open when a charter change measure will be placed on the ballot — March or November 2020. If November is chosen for the referendum, Sunnyvale will almost certainly face a lawsuit, charging the city with conducting an illegal election.

“We have asked the city to change its election system for the 2020 general election,” said attorney Ginger Grimes, representing the parties that made the complaint against the city. “The only critique we have is the timeline and …the city’s proposal to have another [at-large] election.”

Courts have been unfavorable to holding at-large elections during a transition to new election districts or contesting a CVRA lawsuit.*

“Half the speakers [tonight] said ‘stop dragging your feet,” said Council Member Griffiths. “The other half want to expand the scope. So I think we’re in the right place. The plaintiffs have made it clear they will sue if we wait until November 2020 [for the charter amendment]. March 2020 is best — it’s do-able.”

The Council agreed to make a priority of having the referendum ready for the March 2020 primary election, and will make an evaluation in mid-February 2019 before the 90-day safe harbor expires.

“What we’re valuing here is a sound process,” said Vice Mayor Larry Klein, “so we achieve the best decision at the end of the day.”

The Council also discussed whether the question of directly electing Sunnyvale’s mayor should be included in the charter change consideration. It’s a subject that has surfaced in Sunnyvale three times in the last 30 years.

In 1991 and 2011 Sunnyvale voters turned down a directly elected mayor. A 1987 proposal by former Mayor Larry Stone never made it to the ballot.

“Layering issues onto the immediate CVRA concern risks complicating and prolonging the process,” said the staff report, “which the court viewed with disfavor in the Santa Clara [CVRA] case.”

There didn’t appear to be any public enthusiasm for an elected mayor at last week’s meeting.

“The elected mayor has been voted down twice before,” said one speaker from the public who didn’t give her name. “I don’t like it being snuck in the door.”

Another speaker said that there was “no excuse for the six [districts] plus one elected mayor option.”

Tuesday night, several speakers from the public brought up alternative voting systems, asking that these be considered as well as single-member districts.

“I don’t know if districts are an equitable solution,” Okuzumi said.

She suggested that Sunnyvale consider following Santa Clara’s process — resulting in Santa Clara losing a CVRA lawsuit, spending about $200,000 on a pointless referendum, and facing about $1 million in legal bills and as much as $4 to 5 million in plaintiffs’ fees and costs.

The example of Mission Viejo was also brought up, the single case where an alternative voting system rather than single-member districts was accepted as a remedy for voting rights violations.

With only 20 percent of its population a protected minority — Hispanic — despite demonstrated polarized voting, there was no way a minority-majority district could be drawn in Mission Viejo, explained the City’s outside counsel Marguerite Leoni, a national expert on voting rights law and an experienced CVRA litigator.

“Mission Viejo was a settlement because of the demographics of that city,” she said. In that case the court agreed to a cumulative voting remedy.

As Sunnyvale’s population is 43 percent Asian, 33 percent White and 18 percent Hispanic, the City isn’t comparable to Mission Viejo, Leoni said. “I am not aware of any other city that has considered cumulative voting.”

While allowing that alternative voting systems might be a matter of general interest, the Council’s clear intention was not to add this to any plan or referendum.

“My only request,” said Mayor Hendricks, “is that we only look at systems that will satisfy the CVRA.”

Information about the change to by-district elections can be found at https://sunnyvale.ca.gov/news/topics/district.htm.

*In Palmdale, a judge refused to allow the results of such an election to be certified. In Santa Clara, Superior Court Judge Thomas Kuhnle indicated that if that city held another at-large election after being found in violation of voting rights laws in May, he would consider following the Palmdale precedent.