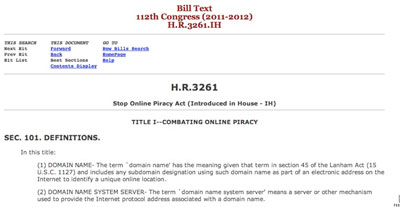 Remember the Clipper Chip? Let me refresh your memory.

Formally known as the Communications Assistance for Law Enforcement Act (CALEA), the Clipper Chip was the NSA’s 1994 attempt to “protect” telephone communications with a special, new encryption method. The only catch was that the government had a back door key to every telephone. But supposedly it would only listen in when “legally authorized.”

Today’s equivalent of the Clipper Chip – and also a product of some of the world’s least technical minds – is SOPA and PIPA, the Stop Online Piracy and Protect IP Acts, respectively. While there are laws protecting copyrighted material on the Internet, the proposed Internet-policing attempts takes aim at websites hosting pirated content.

The law would require Internet companies within five days of being notified, to “take technically feasible and reasonable measures designed to prevent access by its subscribers located within the United States to the foreign infringing site.” The law also makes U.S. Internet companies liable for violations.

The legislation’s supporters, which include the Motion Picture Association of America (MPAA) and the U.S. Chamber of Commerce, say that Internet piracy has become so far-reaching and entrenched that it threatens the very existence of intellectual property-intensive businesses. By providing the gateway, Internet companies are in effect benefiting from the pirated content. The logic is similar to arresting bootleggers for income tax evasion rather than the harder-to-prove crime of racketeering.

Because the law penalizes providing access – but not for denying access – opponents say the proposed law also gives Internet censorship a big boost. Further, by requiring Internet companies to redirect requests for allegedly-pirated websites, the proposed legislation could undermine the security of Internet transactions. For example, a third party would sit in the middle of online payment transactions reading them – and presumably decrypting them.

Transparency is also brought up by opponents. Because website blocking and redirecting happens in the background, it’s hard to know exactly how the operation works and hold anyone accountable.

Opponents say the legislation would effectively stifle Internet business by raising the cost of doing business to levels only the largest companies could afford. Critics say the vague language used in the bills would open the door to Facebook being sued because someone posted a picture of their kid wearing a t-shirt with a Barney logo.

Further, monitoring every website visited by every user for copyright infringement and pirated media implies inspecting everything people do online. In other contexts this is known as “spying.”

But before its constitutionality would be tested, this massive monitoring operating would quickly create Internet gridlock in the U.S. – something that businesses wouldn’t tolerate for very long.

Here again, the Clipper Chip’s history is instructive. Before it had a chance to decimate the Bill of Rights, new cryptographic technology – not controlled by the U.S. government – made the intrusive technology obsolete. Similarly, SOPA/PIPA would simply inspire new technology.

And if you want to know how fast this would happen, well, you won’t have to wait.

Right now you can go to grif.users.anapnea.net/soapy.html and download the Soapy browser plug-in to load websites that are blocked by SOPA. Word has it that Philadelphia-based Web developer Griffin Boyce created it a couple of months ago in three hours.

Beyond that, SOPA/PIPA would encourage data centers to move their Internet servers to non-U.S. addresses. And Santa Clarans would want to think twice about that because one of the city’s fastest-growing industries is data centers.

However, if nothing else, SOPA-PIPA has fostered a rare unanimity in the U.S.’ public opinion by allying groups as disparate as the Tea Party Patriots, ACLU, Consumer Electronics Association, American Express, Heritage Foundation, Moveon.org, the notoriously anarchic 4Chan Bulletin Board, and the Raging Grannies Action League.

Santa Clara’s Congressman Mike Honda is strongly opposed to the legislation. “I have serious concerns about the overly broad definitions of theft included in both bills that could be used to shut down dozens of lawful exchange sites that are valuable outlets for small-scale buying and selling,” he says on his website (honda.house.gov).

“I am also uneasy about the use of DNS blocking as a viable solution, especially within the lens of consumer security standards like DNSSEC. Finally, the complete immunity from federal and state laws granted in these pieces of legislation to several industries could set off an anti-consumer and anti-competitive wave that will strike at the very core of the Internet. The fact that Congress is considering these haphazard bills is a cause for alarm.”

As an alternative, Honda supports Rep. Darrell Issa’s Online Protection and Enforcement of Digital Trade (OPEN) Act. Among other things, OPEN would give the International Trade Commission, not the Justice Department, responsibility to police U.S. connections to foreign rogue sites.

Read all of the proposed legislation and comment on it, chat with legislators, and propose ideas for stopping Internet piracy at www.keepthewebopen.com.