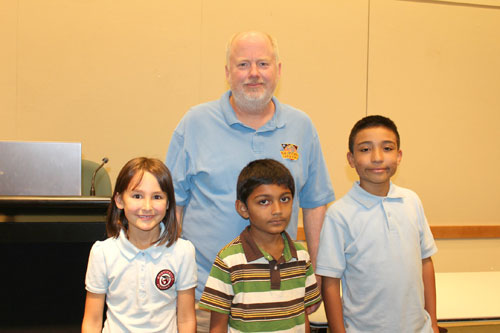 The evening of October 22nd was a school night. But that didn’t stop a large group of children from visiting Santa Clara’s Central Park Library with their parents for a multimedia presentation. Here, fans of outer space exploration, both young and old, marveled at images and videos spotlighting outer space and the missions of NASA, standing for National Aeronautics and Space Administration.

Presenter Eric Norris, a Santa Clara-based estate planning attorney who volunteers as a NASA/JPL Solar System Ambassador, discussed the two Voyager spacecrafts that left Earth in 1977. Voyager 1 was sent to get pictures from Saturn. Voyager 2 went to Uranus and Neptune. Both spacecrafts still regularly send back data even though they have left the planets.

“The instruments are extremely primitive [compared to our technology today],” Norris says of the Voyager spacecrafts’ systems. “How many electronics can run in outer space [for 36 years in icy cold temperatures] on 70K of memory, an 8-track digital recorder, and a 20-watt radio transmitter used to send data back?”

One of the comets Norris mentioned was Comet ISON, expected to be visible in the Bay Area from December 1 to December 17.

“You can get up before dawn to see it, or like me, stay up all night [for at least one night],” Norris says.

A video shown about the Curiosity Rover, a robotic spacecraft sent to Mars in 2011, explains that the mission of the spacecraft is “to find out if Mars ever had the conditions to support life.” According to Norris, instruments on the Curiosity Rover have not detected microbes or signs of past life, although proof that water once existed here has been found.

After the presentation, kids threw out their questions, mostly pertaining to the Mars mission. They wanted to know how the cameras got installed on the Curiosity Rover, if the paths of the different Rovers on Mars would ever intersect, and the likelihood of the Curiosity Rover returning to Earth someday.

“The Curiosity Rover is staying on Mars,” Norris says. “We don’t even have the [resources] to have a mission go and bring back a rock yet.”

“I learned that the Curiosity Rover is collecting data for people who work at NASA so they can learn more about Mars,” says Debbage, who dreams of being a veterinarian or astronaut someday. “I’m really interested in astronomy and in learning about the constellations.”

Community
Author Cynthia ChengPosted on April 1, 2015
For the last six years, ReJoyce Ross has been a learner at Read Santa Clara, the city library’s free literacy program. “What made me...

Community
Author Santa Clara WeeklyPosted on December 6, 2018
The following is a list of events happening in Santa Clara and throughout the Silicon Valley. See our holiday calendar for additional events throughout...
SPONSORED