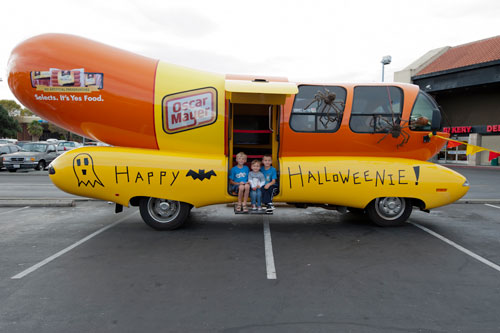 What’s 27 feet long, 11 feet high, eight feet wide, has a backup camera, GPS and six comfortable seats? It’s not the latest model from Detroit, Japan, or anywhere else, but it is a vehicle that is practically guaranteed to bring a smile to nearly everyone’s face when they see it – whether they recognize it or not.

“Each year, over 1,200 people apply for a job to be a Hotdogger, but less than 400 people have actually been accepted since the program started in 1988,” said Jacobsen. But the Wienermobile has been seen on the roads of America for far longer than that.

The first Wienermobile made its debut in 1936 and even though the vehicles have changed over the years, the basic shape (hot dog) and red and yellow colors have remained. Each of the six vehicles has a nickname that is derived from its license plate. Nicknames include “Our Dog,” “Relish Me” and “Wishy” for the plate reading, “I Wish I Was a Wiener.”

The application process and the job of being a Hotdogger isn’t just about driving and meeting people. “We do marketing, public relations, and write blogs from the road. Our friends are definitely jealous too,” said the Hotdoggers.

Once accepted into the program, a Hotdogger goes through a training course at “Hot Dog High” in Madison, Wisconsin, where former police officers have the task of ensuring the Hotdoggers know how to be safe behind the wheel. Even though the dimensions make Wishy seem like it would be difficult to drive, it actually isn’t.

A common question, “What’s it like to drive the Wienermobile?” garnered an almost identical response from both Jacobsen and Rosenblum, “It’s easier than driving a truck.” Hotdoggers have a motto, “We don’t like to scratch our buns.”

Visitors were treated to a ride around the parking lot, which was remarkably smooth. The Weintermobile has crisp and nimble handing – definitely not what one might expect from a giant hot dog on wheels.

“There’s a sense of adventure with it,” added Rosenblum. “We never know who or what groups will show up. One time, a clown greeted us, and another, 14 dachshunds greeted us. Generally, police officers and fire fighters will come out to greet us too.”

The Wienermobile was in Santa Clara for three hours. On October 23, Jacobsen and Rosenblum continued their adventures on the road by taking Wishy to Medford, Oregon. For more information on the Oscar Mayer Wienermobile, visit www.hotdoggerblog.com.