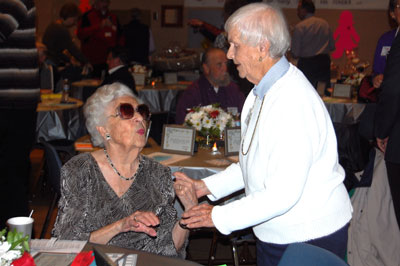 Santa Clara’s Senior Center cafeteria was brimming with decorations, music, display tables, festive opportunity drawing baskets and those people connected to the Heart of the Valley, Senior Services, Inc. This gathering on February 27th acknowledged the 25th anniversary of the part-time agency, as well as the volunteers who come from all walks of life.

In April 1986, Austen Warburton suggested that the Santa Clara Methodist Retirement Foundation, Inc. serve seniors in their homes. (www.servicesforseniors.org/history.html) In June of that year, a Board of Directors was selected for Heart of the Valley. (Three of the five original founders were in attendance at the Silver Anniversary celebration.) By March 30, 1987, Heart of the Valley was incorporated and held its first meeting.

Heart of the Valley assists seniors in West Santa Clara County with what is still the number one request, according to Glenda Cresap, Executive Director; transportation. Seniors still want to be independent and have control of their lives, Cresap reminds us. Many of these drivers were recognized at the special meeting, because they donate their time and resources when gas prices are so high. Glenda Cresap herself is fondly known as the Heart of Heart of the Valley, according to President Deanna Barnett.

Another program Heart of the Valley initiated is the 5 D’s- Don’t Dump Drugs Down Drains. Residents can drop off medications they want to discard at the police department or ask for a volunteer to pick them up and dispose of them safely. By law, a police officer must be present at home visits to pick up prescriptions and over the counter medications. This useful service helps our environment and our citizens. Glorian Quigley and Donna Marencia are the Co-Chairs of the program and were present at the milestone event. Santa Clara Officer Bill Davis, Executive Director of the Police Activities League, could be seen in the audience also.

The evening was conducted as a combination annual business meeting and recognition of the silver anniversary. SONrise provided the entertainment and refreshments were served. Even the place settings were created in honor of the occasion.

Local community leaders, benefactors, and even the departed were not forgotten. County Supervisor Ken Yeager brought a Resolution acknowledging the 25 years of service. The City of Santa Clara and Senior Advisory Commission, among many other supporters, are appreciated by Heart of the Valley.

This non-profit publicly supported corporation provides many more services for seniors than are noted here. They depend on donations and volunteers. Even the recognition of their 25 th anniversary was funded by a donor and was very modest in display, though very vocal in love.

Volunteers are the backbone of our agency, says organizer and Volunteer Coordinator Kirby M. Cristobal.

To donate funds, apply as a volunteer, or learn more, please see www.servicesforseniors.org.

Community
Author Carolyn SchukPosted on June 20, 2018
Have you made a call on your mobile phone or used the internet today? If the answer is yes, you’ve relied on technology from...