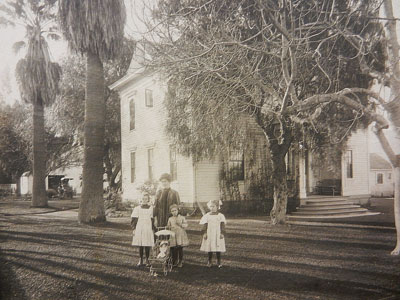 The Harris-Lass House on 1889 Market Street in Santa Clara is rich with local history. Known now as The Harris-Lass Historic Museum, it was named for the two families that resided there from 1865 to 1985.

The first owner of the house was the British cabinetmaker Henry Harris who purchased the thirteen acres of land at the site and built a farmhouse there in 1865. The surrounding land was originally a prune orchard and the house was built around the time Abraham Lincoln was president, according to Bob Byrd, the President of the Historic Preservation Society of Santa Clara. The style of house is known as the Italianate style, which essentially means a “balanced and symmetrical” architecture. (www.harrislass.org) A barn was also built at the same time as the house. Both still stand on the property, and the farmhouse has been upgraded and remodeled through the years. There is also a summer kitchen separate space that was used for canning, laundry, and soap making during the hot summer months. (DVD: “The Final Harvest” A Cupertino Seniors Production).

This is the “last farm site in the city of Santa Clara.” (www.harrislass.org) Mary Hanel, History Librarian of the Santa Clara Library, says that she gathers from her conversation with one of the three surviving descendants of the Lass family, Julia Elizabeth “Betty” Stevens, that during the time it was a working farm, tomatoes and other vegetables were grown and sold there. Apricot and plum trees also thrived. Chickens were raised. Farming was no longer done after World War II when the Lass family sold off most of the property.

The second owners of the Harris-Lass House were Christian Lass, who was born in Schleswig, Germany, and his first wife Julia and grown son Frederick; and second wife, Julia with their three daughters, Carolina, Julia and Johanna. (“History of the State of California and Biographical Record of Coast Counties, California” by Professor J.M. Guinn, Published in Chicago 1904) Christian Lass was a sea captain. The immediate family and Frederick’s wife, also named Julia, occupied the house along with Frederick’s brother-in-law Orie Knauth, and sister-in-law, Bertha Knauth. They moved in after the San Francisco earthquake of 1906 destroyed their recently-built local home, according to Bob Byrd.

Captain Lass retired in 1895 due to a leg injury and was full or part owner of 18 sailing ships by then. He lived in the house for many years, and one of the changes he made within it was to install a speaking tube, removed from a ship, that allowed him to speak from the upstairs to the kitchen regarding when he wanted his coffee. (This is another example of the vast knowledge Bob Byrd shares on his tour of the house.)

Not only has the structure of the home changed throughout the years with rooms being converted for varying uses, e.g. a bedroom into a sewing room or office, and room additions being made; but also, there was a progression “from candlelight to gaslight to electricity,” remarks Byrd. In addition, through the years, chamber pots and outhouses, and pumps for water were replaced by toilets, bathrooms and plumbing. During the early twentieth century, the old-fashioned icebox was replaced by a refrigerator model of the time, complete with the coils on top.

Captain Lass died in his home in 1920. Frederick, his son, kept the farm going until his death in 1932. (Harris-Lass Historic Museum Brochure) Fred’s wife, Julia, died in 1969, four years after having her wish come true to witness the 100tth anniversary of the house. Johanna, their daughter, lived there until she went to live in a retirement community in 1985. She fulfilled her dream of having it be a historic site by selling it to the city of Santa Clara – under market value – in 1987 with that stipulation.

Also in 1987, the Tank House was moved to the remaining one and a half acres upon which the 12-room house now sits. It currently is the gift shop.

The grounds were beautifully landscaped by the city about a decade ago, and are used for events from weddings to the Historic Tea. The Historic Preservation Society of Santa Clara with volunteers and assistance from the city’s Building Maintenance Division are working on a new exhibit in the basement of the museum to open May 1, 2012 about canning. “Preliminary plans are under way for the restoration of the widow’s walk on the roof of the house,” also Bob Byrd confides. “We do one to two projects a year. Any historic house in an ongoing renovation.”

Everyone All Aboard At Cal Stewart Meet