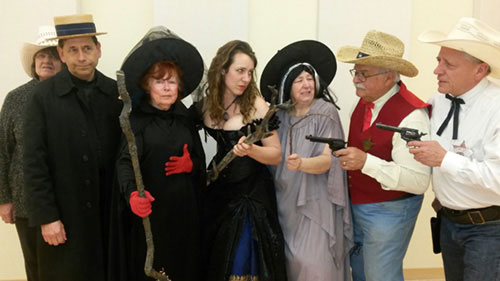 Question: Where can you see an original melodrama, a vaudeville-style variety show, buy a raffle ticket to win a big screen TV, enjoy a beer, and all for less the price of a movie ticket?

If you answered Showtime, you’re right. For 32 years, Showtime has kept Santa Clara audiences laughing, while raising more than $350,000 for the City’s senior health and wellness programs.

Showtime was the brainchild of the late Santa Clara community activist Cleo Stuckrath in the early 1980s when the then-new Proposition 13 decimated funding for Senior Center services. In the early years, Stuckrath was the show’s producer, director, stage manager as well as author of the first 25 melodramas.

This year’s show, “OZ, the Last Chapter – or – Wishes, Witches and Wizards ” is scheduled for March 7, 8 and 9 at the Community Recreation Center. All the favorite Oz characters are on tap, the Tin Man, Scarecrow, Glinda the Good Witch, Munchkins, the Mayor of Munchkinland, and, of course, Dorothy.

“Last Chapter” finds the Munchkin population of the Land of Oz relocated to Doomstown – the mythical town always at the center of Showtime action. Stuck in a depressing refugee camp, the Munchkins have fled from Oz in the face of civil war with the witches of Oz (apparently, not all of them met their ends in Frank L. Baum’s books). Hot on the Munchkins’ tails are the nefarious witches, busy cooking up a poisonous brew that will cement their control of Oz forever.

The Munchkins’ arrival coincides with the latest schemes of shyster “Wizard of OZ,” whose newest cons include selling “Wiz Air” startup stock options, and creating Wiz Through University (get it “whiz through”?) – both of which enterprises will undoubtedly by on the Federal Trade Commission’s investigation to-do list. Add into the mix a photojournalist looking to make a documentary on the plight of the refugees, and some “wand-ering” Harry Potter characters, and you have a potent potion for humor.

But the even the most infamous schemes are destined to fail in the face of detective work by the indefatigable Sheriff Sam and Deputy Dan – who, year after year, defend Doomstown from ever-new criminal assaults. To learn the Emerald City ending, you’ll have to see the show.

The second half of the show is a series of variety acts called “olios,” including comedian-magician Phil Ackerly, composer-pianist Benjamin Belew, audience-pleasing baritone Michael Taylor, and the Town Harmonizers barbershop quartet.

There will also be a raffle, silent auction and plenty of refreshments (including wine and beer courtesy of Santa Clara Kiwanis) organized by the Santa Clara Women’s League.

Showtime curtain time March 7 and 8 is 7 p.m., and March 9 at 2 p.m. Doors open 90 minutes before the show for refreshments and raffle tickets and pre-show entertainment begins 30 minutes before the curtain. All performances are at the Community Recreation Center, 969 Kiely Blvd. in Santa Clara. Admission is $5.00 Friday, and $7.00 Saturday and Sunday.

Tickets are available at the Santa Clara Senior Center on Tuesdays from 8-11 a.m. and Fridays 10 a.m. to 2 p.m., at the Community Recreation Center, and at each performance. For more information, call (408) 425-0320 or visit www.santaclarawomensleague.org.

You can be part of the Showtime fun next year – acting experience isn’t necessary. Email Rick Mauck at rickmauck@yahoo.com, or call the Santa Clara Senior Center at (408) 615-3170 for more information.