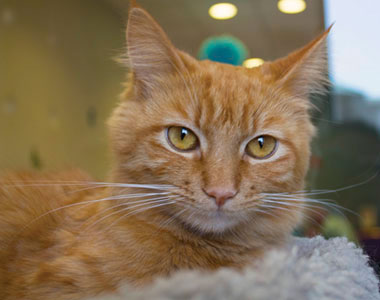 It’s that time of year again. Kitten season is just getting underway and shelters across the Bay Area are trying to get their older animals some extra attention before the young guys move in and take over all the available space. Silicon Valley Animal Control Authority paved the way to kitten season by holding its seventh annual pay-what-you-want-in-adoption-fees Adoptathon event on May 4.

“We always do this event at the beginning of May,” said Shelter Manager Michael Limper. “It’s kind of the precursor to the busy season to try and get a lot of our guys out. We have a lot of guys who have been with us awhile. Sport, he’s one of our dogs, has been with us since November. He’s a great dog – a Chihuahua-Jack Russell mix. He’s a little senior – about eight or nine years old and has had some teeth extractions, but he’s really friendly. We try to get a big crowd in and see if anyone is interested in these guys. When summer comes we get the puppies, we get the kittens ad we don’t get as much interest in some of the longer-term guys. Hopefully we’ll get a big crowd and they’ll see what a great dog he is.”

In the community partners room, Buddy, a five-year-old black pug sits patiently and waits for his next “victim.” As potential adopters meander through the dog and cat areas and back into the space where MickACoo, MickABoo, Save A Bunny and Pug Rescue of Sacramento are set up, Buddy waddles up and says hi. He’s calm, friendly, and the perfect ambassador for the organization.

Earlier this year, Jason Visperas and Steve Elgin adopted Buddy at a similar event. “We went to an adoption event in Concord,” said Visperas, who took the couple’s two pugs, Keoni and Malia, to the event. “As we walked in we saw Buddy. Instantly we felt the connection and fell in love with him.” 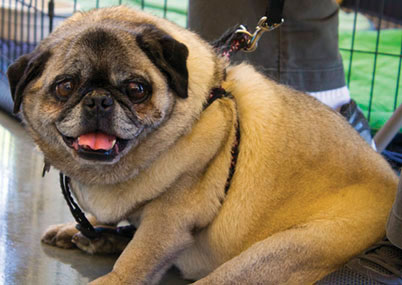 For SVACA’s Adoptathon, PROS brought a handful of pugs to give adopters the opportunity to see how social they are.

Over in SVACA’s cat rooms is Sia, a three-year-old black domestic short hair. “Sia has been here a long time,” said Limper. “She’s a special kitty. She came to us with a head trauma. We don’t know what caused it, but she has one eye looking one way and one eye going the other way. It was hard to tell what it was that did it to her. We also did some teeth extractions. Unfortunately, all of the extractions were on the side were her bad eye is so her mouth is a little droopy on that side. She’s a wonderful cat, but she just looks kind of special. She’s really sweet.”

At press time, both Sia and Sport were still available for adoption. Out of the adoptable 11 dogs, seven cats, and two bunnies, seven dogs and two cats found homes. SVACA currently has 35 kittens in foster care. To see the available animals visit www.svaca.com.