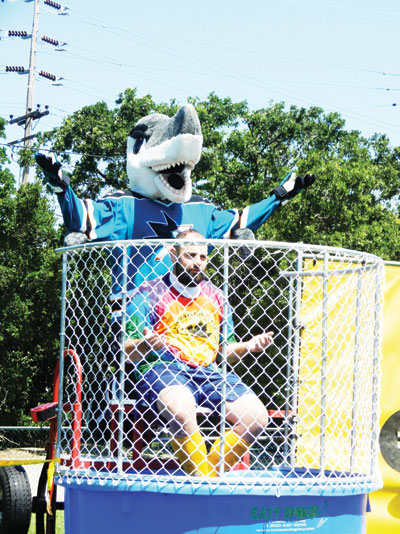 Last year, the Santa Clara Police Activities League (PAL) took a page from the West Side Little League playbook and put on its first ever PAL Family Fun Day. This year, the day of activities and fun returned on May 19.

“It was such a success last year that we brought it back,” said organizer Shuree Teixeria. “[Last year’s success] got everyone excited and brought more excitement to the event this year.”

With over 250 participants in the PAL-GAL softball program, there was a built-in audience for this event and organizers Teixeria, Bill Davis and Deana Wynne decided to use the day as an opportunity to recognize the girls.

“We tied it in with all the divisions and did our awards,” said Wynne. “We also added more booths and advertised more [compared to last year].”

Last year, Sourdough Sam of the San Francisco 49ers entertained attendees, but this year, PAL was able to line up both Sourdough Sam and the San Jose Sharks’ mascot, Sharkie. “Last year, we didn’t have Sharkie because the Sharks were in the playoffs,” said Teixeria.

Sharkie “helped” at the dunk tank by standing on the seat’s trigger and making it impossible for the dunkee to fall into the water, while Sourdough Sam participated in the relay race, which required racers to carry a plated cup of water through a set of cones. The two mascots then faced off in a hitting contest. Each team’s biggest supporter took turns hitting a softball off a tee to determine which mascot could hit the farthest. Righty Sharkie was up first and bombed the ball deep into the field. Lefty Sam came up next and hit a speedy dribbler up the middle of the field. Sharkie continued to blast balls while Sam consistently made solid contact, but failed to gather the distance of the South Bay’s most loved shark.

In addition to the dunk tank, farthest hit, and relay race, event attendees were able to buy tickets to participate in an obstacle course, spin art, and water balloon toss among other carnival-style offerings. Tickets were also available for entry into a drawing for a movie night basket, Flip camera, New York Pizza gift card, or picture of Ireland. In addition, there were 13 baskets up for bidding at the silent auction.

“The success is from the teams – the parents and coaches putting the word out there and telling people to come out and support PAL,” said Teixeria. “All the teams helped by putting together the booths and items for the silent auction.”

All of the proceeds from the event will go directly to Santa Clara PAL-GAL Softball, which currently has 21 teams in five divisions (t-ball, farm, rookies, minors and majors).

PAL-GAL Softball will commence its season July 20-22 at the PAL-GAL Tournament, with games played at both Central Park and Mission College. For more information, visit www.santaclarapal.org/pal-gal-softball/.

Arts & Entertainment Community
Author Carolyn SchukPosted on April 27, 2011
With the exception of Santa Clara’s Christmas teddy bear, there are few city traditions that can claim a pedigree as long as its annual...

Community
Author Carolyn SchukPosted on June 22, 2021June 24, 2021
Rick Valley is known for attentiveness to his Plaza del Rey neighbors; checking in on them, bringing groceries, running errands. When he sees something...