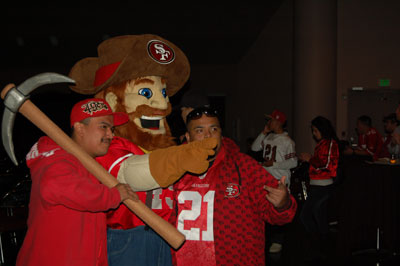 Turning the Santa Clara Convention Center into a swarming sea of red and gold, thousands of 49ers fans flocked to Santa Clara for the 49ers’ seventh annual Draft Party on April 26.

An annual fan favorite, the 49ers’ Draft Party provides fans the opportunity for mingling with and getting autographs from 49ers players, alumni, Gold Rush cheerleaders, as well as watching the NFL Draft live on jumbo screens.

Festivities for all ages included interactive booths, performances by the Gold Rush Cheerleaders and Sourdough Sam, inflatable games, kids-only activities, prize and memorabilia giveaways, a raffle and more, ample opportunities for every patron to participate.

Raffle tickets, benefiting the 49ers Foundation were sold by 49ers Gold Rush Cheerleaders, with an array of prizes. The 49ers Foundation supports development programs for underserved youth to keep them “Safe, On Track and In School.”

In observance of the 75th Anniversary of the Golden Gate Bridge, a portion of the proceeds from the Draft Party were donated through the 49ers Foundation to the Golden Gate National Parks Conservancy.

Oh, as far as the Niners draft picks are concerned, the general consensus is that the team had a very efficient and productive draft.