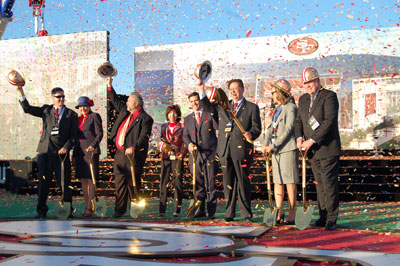 Running with the ball for nearly a decade, culminating over 60 years of fabled history in Santa Clara, the 49ers and the City have reached the end zone, shoveling dirt on April 19, celebrating the groundbreaking of the 49ers’ 68,500-seat stadium in Santa Clara.

Spanning many generations, “This has been decades in the making and it didn’t happen just in the last few years,” said Mayor Jamie Matthews, adding that the vision of past Civic leaders “made this possible to be a crowned jewel here in Santa Clara.”

“This is an exciting time for Santa Clara because it will bring the excitement of the 49ers here. It’s a little bit of Hollywood and it’s a lot of football, but the thing that it is electrifying, it will bring the jobs that we need.”

Key features of the $1 billion stadium include two-thirds of the seats being in the lower bowl, the largest lower bowl, percentage wise, in the NFL. In addition, the stadium is slated to be the first LEED-certified NFL stadium. York adds the stadium will reflect local culinary culture, featuring locally grown produce and local sourcing to produce signature item menus.

“We are going to host a lot of other great events here, and it’s just going to be a magical, magical place. I want to make sure that people understand we set very lofty goals,” said York.

Former Mayor and current Council member Patricia Mahan spoke briefly, “Imagine this, the 49ers playing in the Super Bowl in their home stadium in Santa Clara in 2016. Just like the stadium, whatever we can imagine, whatever we believe in, can really happen. So, we’re onto the Santa Clara Super Bowl L.”

Decades in the making, Santa Clara’s roots with the 49ers began with the paving of the 49ers organization by Santa Clara University alumni – from the early foundation of the 49ers with SCU Grad Tony Morabito, legendary SCU Coach Buck Shaw and fellow SCU Grad Al Rufo to Pro Bowl Tight End and SCU graduate Brent Jones, to dozens of SCU grads playing on 49ers team, to the 49ers’ Marie P. DeBartolo training center and headquarters in Santa Clara, the 49ers and the City have several links throughout the illustrious history of the San Francisco 49ers.

Following the groundbreaking ceremony, guests were treated to a lavish tent party featuring an array of delectable concoctions, beverages and a cake depicting the new stadium.

“We attacked this endeavor the way we always do, with the enthusiasm unknown to mankind, the burning desire to be the best and most importantly a team attitude,” said 49ers Head Coach Jim Harbaugh, adding, “I see a team who’s competing to be the best by building and fighting at the same time, with a shovel in one hand and a sword in the other, to build a great football cathedral.”

For more information on the stadium, visit http://newsantaclarastadium.com/