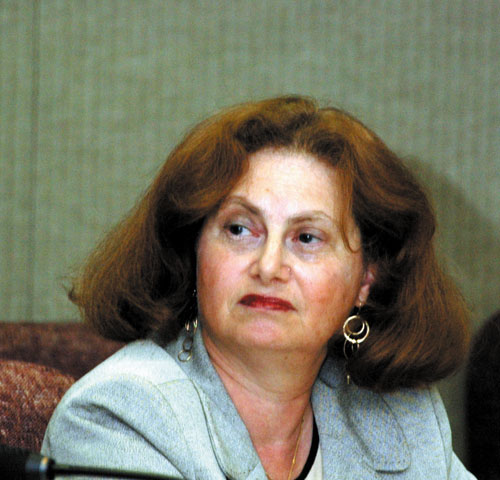 It’s no surprise tempers ran high at the first SCUSD board meeting after the release of the Santa Clara County Office of Education’s audit of district bookkeeping contracts with two outside agencies.

The surprise was what they were running high about at that October 11 meeting: possible political motives behind the way news about the damning report came out. That discussion allowed long-simmering resentment against SCUSD Trustee Ina Bendis to break loose, giving the two-term board member a taste of the blistering criticism she’s known for heaping on others.

At the October 4 candidates forum, the audit was mentioned several times specifically by school board candidate Christopher Stampolis, and later that night featured in an NBC Bay Area TV news story. Before the forum, Bendis reportedly distributed a two-page summary of the report to audience members.

“I was very dismayed hearing about the audit in a political situation, and I thought that was very inappropriate,” resident April Spurgess told the board. “And I really have to question… what is the political intent of the audit [being] released at this time.”

Classified Employees Union President Patti Picard expressed more than dismay. “There was a time when we could rely on the board to take care of business in a professional and adult manner,” she began.

“But [things] have changed…Now I have to review the agenda and see if there are things that could be an issue. That’s because one person on the board feels compelled to have her voice heard over all others. After all, her degrees must make her smarter than everyone else. Just ask her.” (Bendis holds a Ph.D, M.D., and J.D.)

“So it should come as no surprise, at the candidates forum last Thursday, candidate Stampolis announces that the County Office of Education is investigating the business department,” Picard continued. “You might ask how he hit on this information… and…chose to state it at a public forum. The answer is sitting before me. Ms. Bendis took it upon herself to go public with this information.

“She handed out flyers with parts of this information before the forum started. I dare her and Stampolis to say this was not politically motivated,” Picard went on. “Does she forget that she’s part of the same board that Stampolis accused of not doing their job?”

“She also went public with the local TV station, holding a press conference. It was clearly not her place to release press information. I do not see ‘board president’ next to her name…For someone with a degree in law, you would think she would respect the process. But that would affect her and Stampolis’ opportunity to use this as a political weapon.”

Stampolis and Bendis are both officers of the Mission City Democratic Club. Bendis has provided pro bono legal advice to Stampolis and contributed to his campaign for mayor in 2010. Stampolis’ wife, Anna Song is a member of the County Board of Education.

“I received my copy of the auditor’s report from the county office of education,” Stampolis said in response. “I would advise anyone who has any question about timelines to… contact the superintendent’s office and ask when they decided this was a public document.”

Bendis had earlier posed exactly that question to County Superintendent of Education Xavier De La Torre at the October 11 meeting:

“That document became a public record only after it was hand-delivered to the Santa Clara Unified School District,” replied De La Torres. “And that day was October 2.”

To her knowledge, that day Plough and her assistant were the only people outside the Santa Clara County Office of Education (SCCOE) staff who knew about the report. “At that point,” she says, “the reports were locked up in my office as I had classroom visits and a meeting that day.”

Early that afternoon, while Plough was reviewing the report with the district’s legal counsel, Bendis called her “demanding a copy of the report immediately.” Plough responded that, “the whole board should receive the report at the same time, and legal counsel should review to determine timeline and best next steps for distribution and process.”

The answer didn’t satisfy Bendis, Plough says, and Bendis then called the SCCBOE office, which refused to release the report to her.

That evening Plough informed board members of the report and told them it could be picked up the next morning, Wednesday, October 3. The district’s legal counsel advised that the report should not be publicized until all named employees were informed, says Plough.

“It is in the best interest of the District if they [did] not discuss the report with the public since this report involves potential employee discipline, and the Board ultimately serves as the body of appeal, should the employees challenge any employee discipline.”

However, on Wednesday afternoon, NBC called Plough asking about the report – even before Plough informed all the employees named in the report.

“I do not take lightly a lack of due process for anyone,” UTSC President Tracy Pope told the October 11 Board meeting. “It’s tremendously bothersome when anyone has their due process rights trampled on. And I believe that the information about this particular situation and…the way it came out… [is] disturbing.”

Bendis’ actions may expose the district to litigation. “By publicizing the report prior to employee notification and distributing a portion of the report to a public gathering,” Plough said in an email, “the employees certainly have an opportunity to question whether or not the district protected their due process and privacy rights.”

SCUSD Doesn't Have an Achievement Gap: America Does