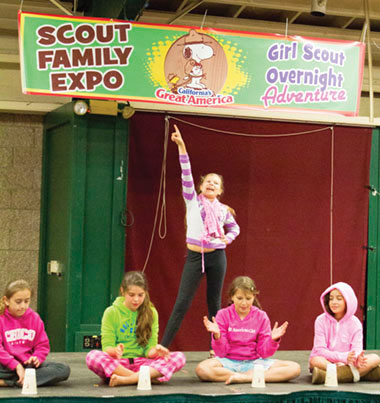 “Scouting has its roots in camping and spending the night outside at California’s Great America is a special atmosphere that can’t be replicated,” said Great America’s Public Relations Manager Roger Ross. “The Girl Scouts are a terrific organization at both the local and national level and we enjoy providing them a unique opportunity.”

At 10 a.m. on June 8, Girl Scout troops entered the park and began riding rides and spending time with friends. From 3 p.m. to 5 p.m. the girls were able to pick up their event patch, and at 5 p.m. girls who signed up were able to compete in the Girl Scout Karaoke Contest. Of the 17 entrants, 15 performed and the top three were awarded prizes. Jaelynn, Kaira and Brenee of Oakland’s Troop 30017 took third place by singing Justin Bieber’s “Baby.” Anam Ahmed of Troop 30177 sang Adele’s “Someone Like You” and picked up the second place prize. But, it was Demi Lovato’s “Skyscraper,” sung by Alanna of Pleasanton’s Troop 31364 that garnered first place and a prize package containing a Great America hat, bag, and pencil. 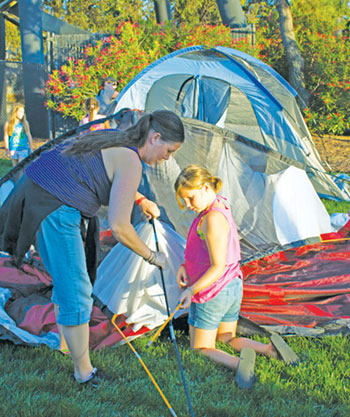 After the karaoke contest, girls could return to the park or head back to the picnic area where they were served a dinner of a hamburger, potato salad and beans. At 7:30 p.m., the back gates were opened and troops who were staying overnight went out to their cars and gathered their camping equipment. Within an hour, the entire back of Great America was a campsite with dozens of tents pitched in front of the Flight Deck roller coaster.

Between 9 and 11 p.m. the 300 girls participating in the overnight event were able to showcase any skits they had prepared, but only one troop, 60149 of San Jose, took advantage of the stage early on when they performed “The Cup Song” from Pitch Perfect and modified scenes from Despicable Me.

When the girls rose, bright and early on June 9, they cleaned up camp, were treated to a continental breakfast, and then given access to another fun-filled day at the park.

For more information about Girl Scouting in Santa Clara or to learn how to join, visit www.girlscoutsnorcal.org.

Community Sports
Author Erika TownePosted on June 30, 2022
On June 23, Jalen Williams did something that few Santa Clara University (SCU) athletes have ever done—he was drafted into the NBA. Williams was...
SPONSORED