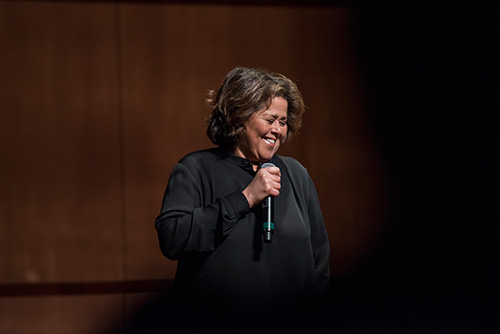 SCU’s Music Recital Hall filled to capacity on Feb. 7 as Anna Deavere Smith–one of SCU’s 2016-2017 Frank Sinatra Artist-in-Residence–spoke on “The Art of Communication” before an extensive Q&A.

While Smith is well-known for her television work–she played Dr. Nancy McNally on The West Wing and Gloria Akalitus on Nurse Jackie–her talk focused on her revolutionary documentary theatre work composed of verbatim excerpts from the interviews she conducts and then performed in character. Although this process was described during the awarding of her 1996 MacArthur fellowship as “a blend of theatrical art, social commentary, journalism, and intimate reverie,” Smith’s description is much simpler. Inspired by her grandfather’s wisdom, she realized early on that she wanted to know “America word for word.”

As Smith offered an overview of her career, she revealed the subtitle of her evening’s talk–“storytelling, listening, and authenticity”–frames the window of work that she’s been doing for her extensive social justice themed play series, “On the Road: A Search for the American Character.” Within this series, Smith tackles such issues as riots with the New York City based Fires in the Mirror (1992) and Twilight: Los Angeles, 1992 along with the health-care system in Let Me Down Easy (2009). Her current work–which she alluded to several times throughout the evening–dwells on the “school to prison” pipeline across the United States.

As a M.F.A graduate student at A.C.T. in San Francisco, Smith scoured the shelves of City Lights Bookstore searching for plays by non-white male authors to find parts to play. Gradually, she created her own. “To walk in people’s words,” Smith said, “I have to get the words.” In her extensive interviews with people, she learns to look for shifts or differences in voice–the broken pattern often signals a story emerging. It is in those moments of catastrophe, Smith explained, that one finds most people willing to talk and explore these stories. Her plays, which often presents these strings of monologues without narration or any additional editorial framing, hope to bring a sense of dignity to the people’s stories and give her a voice with which to share these experiences.

“Listening, to me,” Smith said, “is a great artistic expression.” While Smith can find her subjects anywhere–her narcissistic hairdresser, for example, played themself in one of her performances–she still follows the same basic principle: learn from each interview. As she revealed in the Q&A, Smith reminds herself before each interview “I really don’t know”–so she can be open to hearing and focusing more about the subject at hand. As her videographer jokes, her next book should really be titled “Say More about That” since Smith uses that line so frequently in her interviews.

Of course, Smith treated her audience to several short monologues that reflected her incredible study of the voice and body mannerisms of her subjects. While Smith still doesn’t like to introduce herself as an actor since she dreads the inevitable question–“What do I know you from?”–her final performance of the evening brought members of the audience to their feet. The piece, “Don’t Let Me Down Easy” is a glimpse into the life of Chance Orphanage Director Trudy Howell who compassionately cares for dying children in Johannesburg, South Africa, demonstrated how powerful listening to someone else’s story can be.

During the Q&A, Smith, a professor at New York University, was full of warm, approachable advice for the audience. While much of the conversation revolved around listening or interviewing, Smith turned the tables on one audience member, asking her to answer her own question–“What lessons would you tell your younger self?” While Smith also offered a response, “everything’s gonna be okay,” she clearly believes in a line she’d shared earlier that evening, “Education should not be about answers, but questions–and find your questions.”

Smith returns to Santa Clara to help illuminate more questions on March 10 (opening night of the new SCU play Welcome to Claradise) and March 11, to participate in a talkback with members of the cast following the production.

CLASS NOTES - HAIL TO THE CHIEFS

Schools
Author Alissa SorotenPosted on June 11, 2021
With one of the toughest school years behind them, the Santa Clara Unified School District Board of Trustees set their sights on how they’re...

Public Safety Schools
Author Erika TownePosted on December 16, 2018
“When I first heard I was nominated I didn’t believe it; I thought it was a joke,” Carl Smith laughed. “I’m just going to...

Schools
Author Diane AndrewsPosted on March 17, 2017
The Sutter Elementary School multi-purpose room was transformed into a colorful art gallery with more than 500 student drawings plus about 200 clay sculptures...
SPONSORED