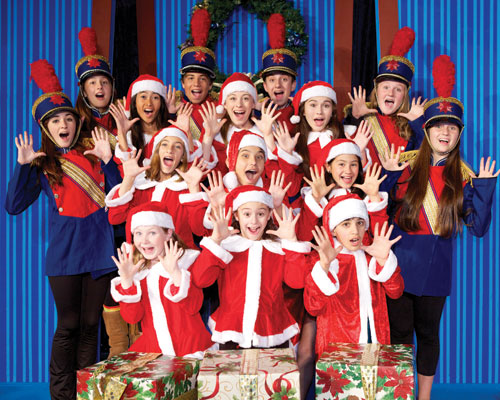 But, what happens when Santa gets held up sunning on the beach and can’t make his “fantastic musical review”? Is the show cancelled or must it go on under the direction of Santa’s favorite elves and Toy Soldier Guard?

In an original production by Scott, Shannon and Stephen Guggenheim, Santa’s helpers quickly jump into their roles to keep the Christmas spirit alive. With nods to classic Christmas stories and sing-a-longs to Christmas songs (yes, audience participation through song is strongly encouraged), the audience is sure to be pleased with this production.

The cast performs a rendition of ‘Twas The Night Before Christmas and How the Grinch Stole Christmas, sings fun Christmas songs like Rockin’ Around the Christmas Tree and Santa, Baby, and even teaches proper letter-writing etiquette (because you don’t want to upset the big guy).

Eventually Santa makes his grand entrance, but it’s just as the show is ending. However, it’s the perfect segue to the post-show party where, for a small fee, children (and even adults) can create Christmas cards, make photo frames, decorate cookies, and visit and have their photo taken with Santa.

Cast members for Santastic! come from across the South Bay (including Santa Clara) and range in age from 10 (Lily Guggenheim) to 16 (Rheagan Rizio). The show itself is a delightful combination of musical theater and audience interaction. Seriously, listen to someone sing Mele Kalikimaka and try not to smile…I double dog dare you!

The pricing for the show varies from $18 for a single ticket to the 45 minute show to $44 for an All Access Pass which includes a ticket to the show, a Fun Pack (goodie bag of props), access to the Imagination Stations, and a visit with Santa along with a printed and emailed photo. The pricing steps came from the Guggenheim’s experience with attending similar shows.

“Shannon and I have been taking Lily, our oldest, to Phineas and Ferb and things like that,” said Scott Guggenheim. “When we go to those things, it’s already really expensive because they’ve included everything. Mom and dad pay for the same ticket as the kids but they don’t do [the after-show projects]. So we thought we’d try it but make it so mom and dad don’t have to pay and you choose the upgrades and we weren’t sure how it was going to work…This morning we had about 50 kids going through the activity. This [afternoon] I think I only gave about 20-25 wristbands away.”

Our Lady of Guadalupe Sacred Drama