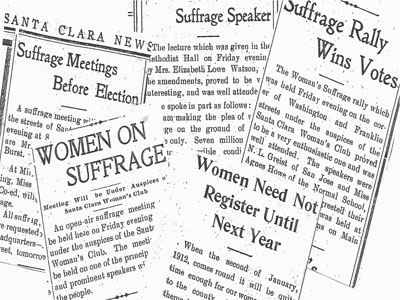 Ladies, the next time you vote take a moment to thank the Santa Clara Woman’s Club.

Tireless grassroots campaigning on the part of local Woman’s Clubs was one reason that California women got the vote almost 10 years before the 19th Amendment passed in 1920.

The Woman’s Club’s minutes preserve a record of those efforts. The March 1911 meeting minutes report “Catherine Bingham spoke on suffrage.” And at the Sept.1, 1911 meeting members decided that “if a rig could be procured, those able would ride in the Labor Day Procession” in support of women’s suffrage.

On Sept. 29, 1911, Woman’s Club member Lucy Higgins presented a Suffrage Day capped by an Open Air Meeting that evening. Held on Washington and Franklin Streets, one of two featured speakers at the meeting – today we would call it a demonstration – was Miss Agnes Howe of San Jose Normal School (now known as San Jose State University). The meeting was “well attended” and “much enthusiasm greeted the addresses,” reported the Oct. 3, 1911 Santa Clara News.

When the final tally tipped the scales in favor of voting equality for women – 125,037 to 121,450 – it was, the New York Times wrote on Oct. 12, 1911 “the farmers that gave it to them. Overcoming a majority of 16,000 from this city [San Francisco] and Oakland against suffrage, an avalanche of votes from Los Angeles and rural counties gave the amendment a majority.”

The hostility of urban centers to women’s suffrage was explained, the Times continued, “by the fact that the saloon interests were almost solid against suffrage, because liquor men fear that women if given the ballot would endeavor to make California a dry state…where the saloon influence was weak the suffrage vote was large, but where the saloon was powerful, suffrage was beaten.”

To help celebrate this centennial – as well as its own 50th anniversary – the Santa Clara Players’ One Act Players troupe has organized a traveling show, “Should Women Vote?” about the suffrage debate. The show features adaptations of humorous plays – today we’d call it “guerilla theater” – that were used in the campaign for women’s voting rights.

“Should Women Vote?” debuts at the Mission Library on Wed., Oct 12, 2011 at 6:30 p.m. as part of the Santa Clara City library’s celebration of the centennial of women’s suffrage. The show will be also be performed at Central Park Library Redwood Room on October 23 at 2:00 p.m. with refreshments provided by the Santa Clara Woman’s Club.

On Oct. 16, at 2:00 p.m., the Central Library also presents Portraits of the Past’s “Portrayals of Santa Clara Valley Women Leaders.” Part of History San Jose, the Portraits of the Past troupe makes history come alive with period costumes, music, and dramatic sketches.

You can explore Santa Clara history on your own simply by visiting the Heritage Pavilion on the second floor of the Central Library. The archive include books, maps, photographs, posters, newspapers – including copies of Santa Clara newspapers, which aren’t available online – scrapbooks, pamphlets, oral histories and other primary source documents. You can see some of these at library.santaclaraca.gov/index.aspx?page=1171.

The Santa Clara Central library is at 2635 Homestead Road (between Kiely and San Tomas). The Mission branch library is at 1098 Lexington St. For information, visit library.santaclaraca.gov or call (408) 615-2900.