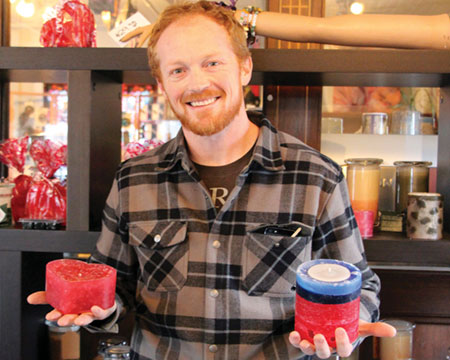 They come in scents like “Letters from Home” and “USMC Berry,” but military-based names aren’t the only thing that Sergeant Daniel Brenner was thinking of when he created Daniel’s Candles, a candle company that gives back to veterans.

It all started after Brenner’s five-years of duty with the Marine Corps, which included two tours in Fallujah during the mid-2000s, ended. He returned home and enrolled at Foothill College where he took a cultural anthropology class. Thinking anthropology was the way to go for his future career, Brenner went on a trip to Ecuador with professor Sam Connell, but ultimately decided it wasn’t for him.

As he sat down to think about what he really enjoyed, inspiration struck. “A little vision came into my head of when I was a kid at arts and crafts, at a little summer thing we went to in Guerneville – filling a milk crate with ice and melting crayons, pouring the crayons over the ice and putting a wick in it. When you peel off the milk carton there’s all these holes in it and it looked really cool and I just had this vision of that and thought that I had never seen [a candle] like that since I was a kid…And I started thinking. What if I do that?” With that, Daniel’s Candles was born.

“I don’t have a mass produced product so none of my stuff is exactly the same,” he says. “I found out that more people are interested in the imperfections than everything being perfect. When you can tell someone made it, opposed to a machine, you value it a little bit more.”

“It’s not an exact science,” says Brenner, who uses candle making as art therapy. “Even when you’re trying to come up with color combinations or like just the way a candle should look, it’s all about what else is going on at the same time – your emotions and everything that you’re feeling.” 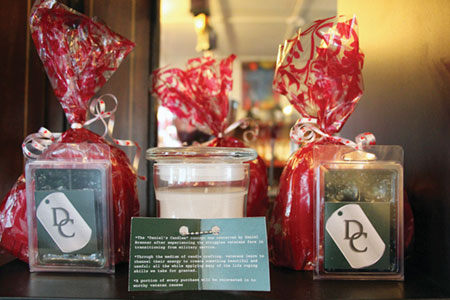 Brenner wants to be known for a trustworthy, socially responsible and transparent company and donates a portion of each of his sales to helping those who have served in the military. He is currently holding an event at the Foothill College Veteran’s Resource Center (through Feb. 13) where from 10 a.m. to 2:30 p.m. he will donate 30 percent of all sales to a scholarship for veterans.

“My goal is to raise $500 because I won a veteran’s scholarship and it was really uplifting,” he says. “It was really nice to get this pat on the back. It was the Friends of American Veterans Scholarship and it was put on through the Rotary Club of Los Altos…it was such a big boost in my confidence that I thought, why can’t I do this for someone else?”

Going forward, Brenner hopes to continue working with the Rotary Club to find the best place for the funds he donates to veterans. He also thanks the Fleet Reserve Association (FRA) Post 101 at the American Legion on Walsh Avenue for the help and support he has received from them.

Daniel’s Candles can be purchased on Etsy http://www.etsy.com/shop/DanielsCandles and at Studio Bongiorno (500 Lincoln St. Santa Clara). He also takes special and large orders, including orders for wedding favors. Visit www.danielscandles.com for additional information.