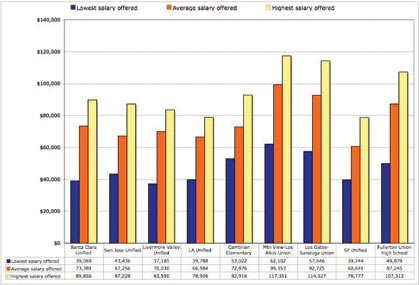 Since the mid-1980s, there has been an increasing howl of complaint that public school teachers “make too much money” – reaching a crescendo around 2000. It’s an assertion made routinely by right-wing TV pundits who garner tens of millions in income by unearthing egregious betrayals of the public trust and passing them off as the status quo.

So it’s time for some hard data.

Last year the California Department of Education School Fiscal Services Division – unlike Glenn Beck – surveyed the salary scales for every school district and county education office in the state. The results contradict both those who believe that teachers are fattening luxuriously in the public trough, and those who claim teachers can barely eke out a pinched living at the bottom of the economic ladder.

The chart shows a sampling of lowest, highest, and average full-time teacher salaries from some representative districts around California, and particularly in the San Francisco Bay Area.

Next : The CalSTRS pension system.

Schools
Author Atoosa SavarnejadPosted on March 28, 2018
By unanimous approval, at the March 22 Board Meeting, the Santa Clara Unified School District Board agreed to submit a resolution to state and...

Schools
Author David AlexanderPosted on May 30, 2017
Advocates from the Alviso neighborhood blew the whistle on the Santa Clara School Board, claiming a social justice foul. Although many parents of Don...