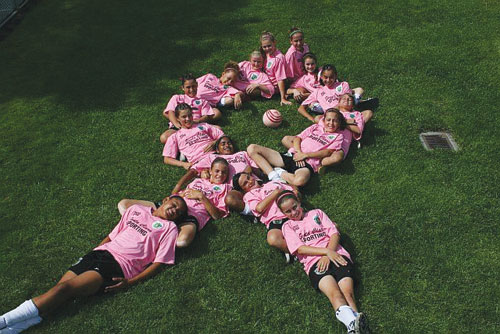 By the end of its 5th Annual Goals for a Cure Fight Against Breast Cancer campaign this month, Santa Clara Sporting Soccer Club will have raised more than $100,000. The club’s 36 teams of elementary-age through high school-age youth collect donations through creative fundraising efforts and a month-long goal-a-thon, with supporters making a donation for every goal the teams score.

One hundred percent of the Goals for a Cure funds are used for breast cancer screening, and 120 women have already received free mammograms at El Camino Hospital in Mountain View. Forty-eight of these women were diagnosed with breast cancer and started treatment.

The club began its efforts to fight breast cancer in 2008 after two soccer player moms were diagnosed with breast cancer – one passed away. For information about the soccer club and its Goals for a Cure campaign, visit www.santaclarasporting.com.

Community
Author Diane AndrewsPosted on December 13, 2017
After Shirley Granum had back surgery in January of 2011, she could no longer golf but still needed to get exercise. So the Santa...