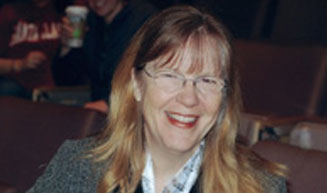 Soprano Nancy Wait Kromm is known for her engaging performances of new and interesting music. Her debut in November of Bay Area composer Henry Mollicone’s “Songs of the Human Spirit,” is just the most recent.

From 2004 through 2008 Wait Kromm – a Santa Clara resident and Associate Professor of music at Santa Clara University – presented a series of concerts, “God’s Grandeur,” meditating on the natural world, human relationships, and the divine.

In 2006 she participated in the premiere of SCU colleague Pamela Layman Quist’s Requiem for the People. The same year she also premiered the work of another Bay Area composer: Henry Mollicone’s “Beatitude Mass” – a work written to draw attention to homelessness, and using the words of homeless people themselves.

Since its composition, the “Beatitude Mass” has raised over $100,000 for services to homeless people.

“It’s amazing to see how this one composition has caught the imagination and energy of so many,” says Wait Kromm. “The work gives both performers and audience an opportunity to make a positive difference. And not one of us could donate $100,000 single handedly; we had to do it together.”

Wait Kromm commissioned “Songs of the Human Spirit” as part of her current recording project: musical settings of Native American poetry by American composers from the 18th to the 21st centuries.

“My commission for this song cycle grew out of my family’s visit to Crazy Horse National Monument in South Dakota,” explains Wait Kromm, “which receives no federal funding and is being carved out of a huge mountain.  It was begun at least 50 years ago and is still in progress.

“I was so moved by the spirit there in the black hills that I came back and asked Henry [Mollicone] to write songs for me that reflected the indomitable spirit of Native American philosophy,” she continues. “The result is this beautiful and moving [song] cycle, for flute, soprano, and piano, which includes Shoshone, Aztec, Lakota Sioux, and anonymous texts.”

Part of a benefit concert for homelessness, the new work was presented on Oct. 29 at Stone Church of Willow Glen and Nov.13 at downtown San Jose’s historic Trinity Episcopal Cathedral. The concert showcased Mollicone’s choral and solo vocal music, as well as the talents of the Stone Church Chancel Choir of Willow Glen and Wait Kromm’s husband, well-known Bay Area conductor and baritone, Leroy Kromm.

Described by the Washington Post as “One of the most distinctive American opera composers,” Henry Mollicone teaches at Belmont’s Notre Dame de Namur University and West Valley College in Saratoga, and is music director of the Winchester Symphony.

You can hear selections from Mollicone’s “Beatitude Mass” at henrymollicone.com/discography.

Every Mouse Has Its Day