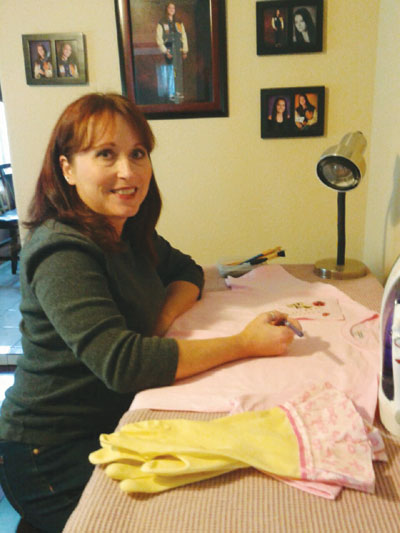 About three years ago Tracy Sousa heard the one word no one wants to hear – cancer. Only, she didn’t have cancer. It was her father who had been diagnosed with stage four lung cancer.

“He was told he had to go through a lot of chemotherapy,” said Souza. “His doctors recommended he get a chemo port put in.” A chemotherapy port is a small medical device put beneath the skin just under the collarbone to help facilitate the chemotherapy treatment.

Once the port was installed and the treatments began Souza’s father had one major complaint – having to take and keep his shirt off during treatment. “My dad always wore t-shirts and he would have to take off his shirt to get hooked up and put his shirt back on. One day he said I needed to make him a shirt with an opening. That way he did not have to remove his shirt. I started working on it right away. I needed to get a perfect size opening and perfect size flap to cover the opening. So, I came up with an idea,” said Souza. “I make an opening in a t-shirt using iron on fabric tape so the cut ends don’t fray. I use another shirt to cut a larger flap, still using the fabric tape so the ends don’t fray. I attach the flap with iron on Velcro so it can be folded down to expose the chemo port. I decorated the flap with my dad’s favorite sport – Football! It worked great.”

The original idea, spurred by her father’s diagnosis, eventually became Tracy’s T’s for Chemo, a small Santa Clara company. Unfortunately, Souza’s father passed from the disease, but Souza has found comfort in knowing that she can help others remain comfortable during a procedure with some uncomfortable side effects. “I love to make things and if I can put a smile or just make someone happy for a few minutes it’s well worth it!” said Souza.

Souza’s shirts can be made in any size, color, and with any type of design on the flap. The t-shirts are $25, which includes shipping costs. Currently, Souza has an Etsy store set up for those interested in purchasing a shirt for themselves or a loved one at www.tracytsforchemo.etsy.com. Souza can be contacted directly at tsforchemo@comcast.net.