In what has become an annual tradition, the City of Santa Clara’s Cultural Commission has announced the latest winners of this year’s Halloween Home Decorating Contest. This year the Commission awarded three prizes: Scariest, Most Original and People’s Choice, which was voted on by the public. 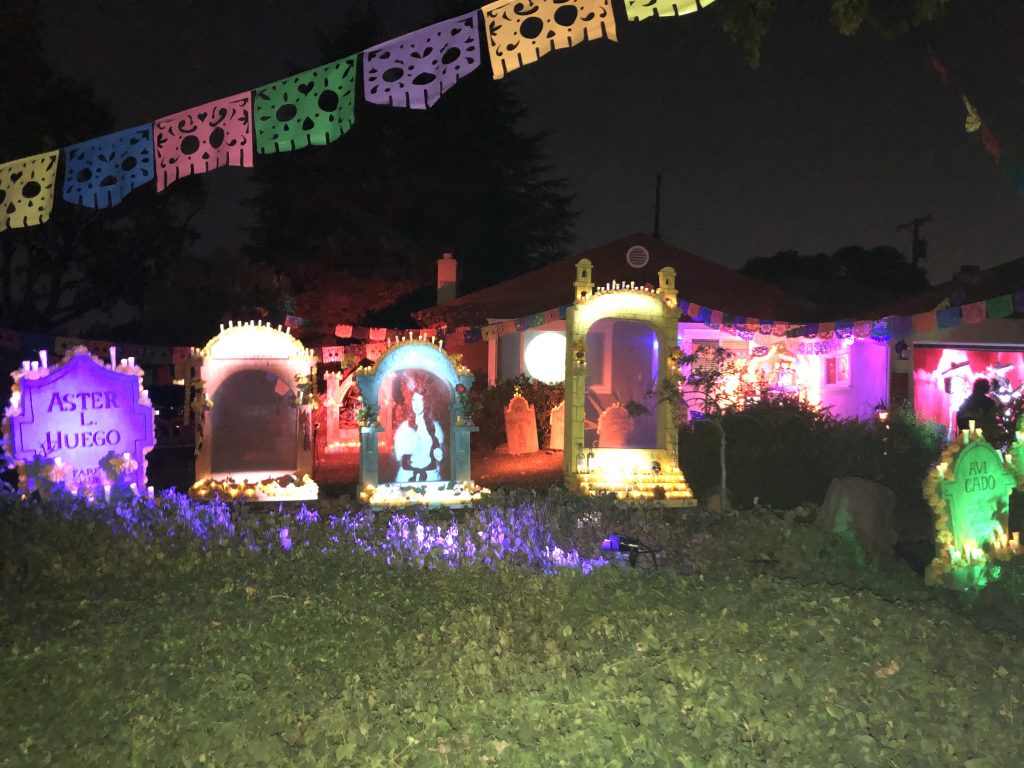 “This is the first time we’ve collaborated at this house,” said Britta Peterson, who along with her co-conspirators, Jerry Diego and her husband Glen, won this year’s People’s Choice award. “We collaborated on another show in 2015 at my house, but Jerry’s been doing his own decorations and I’ve been doing my own decorations separately before we even met each other.”

Call it a super team if you will. Britta’s a master crafter, while Glen is an electrical engineer. Jerry’s background in theater design brings it all together.

The decorations this year include animatronics, video projections and more, all dedicated to the Mexican celebration Dia de los Muertos. For the decorators, accuracy was key.

“We’ve had people who are originally from Oaxaca [Mexico], the region that has been the central place for Dia de los Muertos and they’ve thanked us for doing this,” said Peterson. “If they have kids here that have never seen that, they said this was like home.”

“A woman came to me, she was crying…she [said] I left Mexico and I didn’t think I would ever see this again,” said Diego.

Peterson and Diego hit it off through their mutual love of Halloween.

“Jerry bought one of my books [on Halloween] to review it because he runs a site called My Scary Halloween,” said Peterson. “He looked on the title page and realized that he lived a mile away from me. He contacted me and we hit it off and we’ve been great friends ever since.”

For the winner of this year’s scariest house, it’s a labor of love as well. 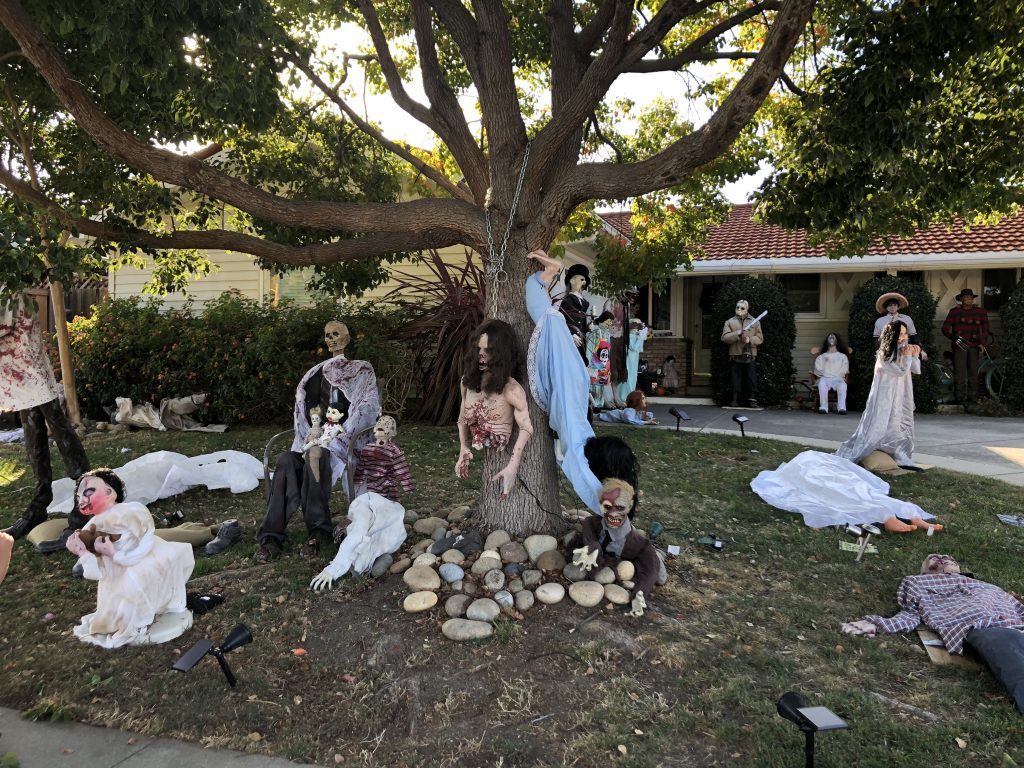 “Every year my dad gets new things and puts them up and then sells old things to keep new things coming in every year,” said Adam Apolinar. “It’s always been his favorite holiday. He likes seeing all the families come out and all the kids in their costumes, getting scared. He just really like the holiday.”

Adam says his dad, Ed, was so excited to win the Scariest House award he immediately texted the rest of the family. While Ed is the driving force behind the decorations, it’s a love his whole family happily supports.

“The family all comes out in the driveway and we make them come up so if you want to get candy you have to go by all the stuff that jumps out and you,” said Adam Apolinar with a smile. “Sometimes, if there’s really little kids and they don’t want to come up we go and give them candy, but try and make the kids come up so they get the experience of walking up and seeing everything. There’s a lot of stuff that when it’s on, it will jump out at you.”

The winner of the Most Original home of the 2019 Halloween Home Decorating Contest was a Pirates of the Caribbean theme complete with a shipwrecked ship in the front yard. 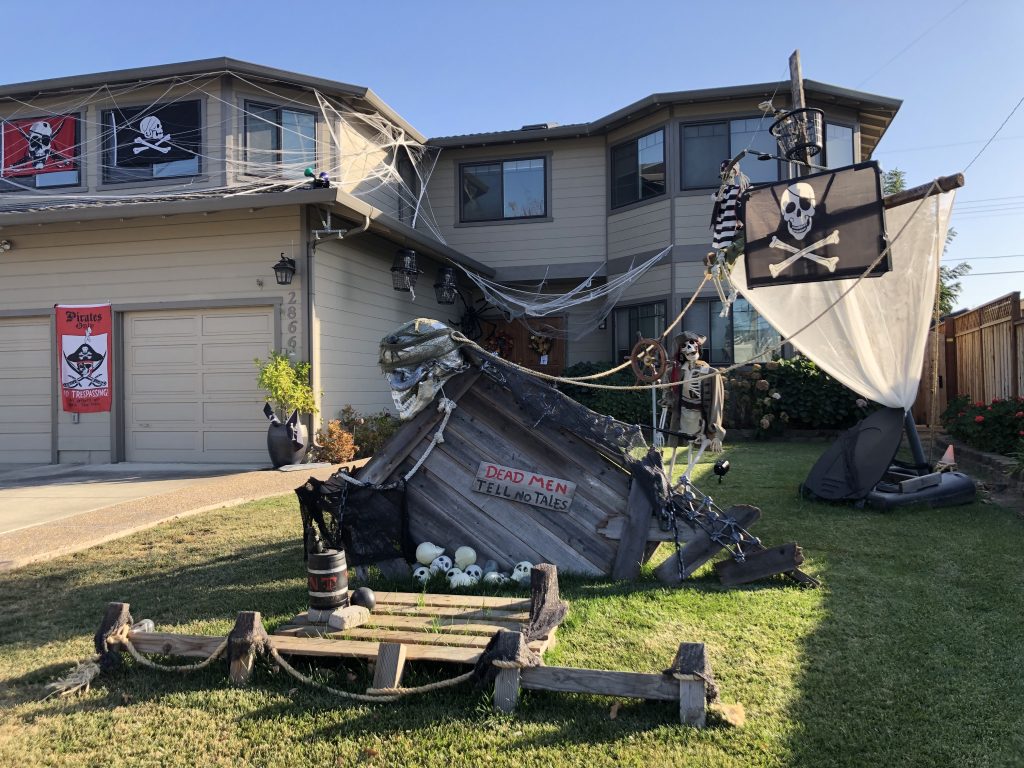 A list of all the homes involved in this year’s contest can be found on the Cultural Commission page of the City’s website.

In the Valley this Week: October 31 – November 6