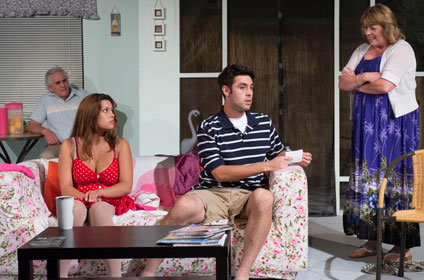 Sitcom dialog, innuendos, barbs and insults successfully make it to the small stage in Santa Clara Players’ latest production, Spreading It Around. Written by Londos D’Arrigo, Spreading takes place in a Florida retirement community. The play opens in the apartment of Angela Drayton (Karie Vaughan) and it is there that we’re introduced to neighbor, handyman and widower, Martin Wheeler (Steve Corelis). Wheeler and Drayton get along well as neighbors and Wheeler comes and goes from Drayton’s apartment with the ease of someone who actually lives there.

When Drayton expresses her concern about Wheeler not dating or not about caring what he wears, Corelis, displaying a hint of the acting ability that has made him a Santa Clara Players favorite, mimics the actions of the various ladies courting him. Wheeler and Drayton’s familiarity and overall easiness together lead the audience to think maybe there’s more going on than just a couple of good friends spending time together. It’s the first preview of what’s to come, as things get complicated and misunderstandings ensue, giving Spreading its sitcom-esque feel. Little misunderstandings make for the best laughs, although quite a few of those laughs are groaners.

As Drayton’s character develops, we learn she’s grown tired of sending her children money – literally acting like a no-charge ATM – whenever they need something. With Wheeler’s help, they form the Spend It Now (SIN) Foundation. The idea is to spend their money instead of leaving it to their children who don’t visit, call or so much as say “Thank You.” The foundation (“Seniors doing it together while they still can”) provides canes, wheelchairs, rent and other necessities to those in need.

Like a good sitcom, the misunderstandings start when Drayton’s son, Larry (Fidencio Enriquez), and daughter-in law, Traci, “with an I” (Jackie Baldinger), come for an unannounced visit to see what they will inherit when Drayton dies. Finding flyers that talk about what the SIN Foundation provides, they begin imagining ways those things could be used, proving the theory that the dirtiest part of the human body is one’s mind. Baldinger’s Traci is very believable as a woman who wants, and demands, pleasure, even when she can only bring closed-toe shoes with her to Florida. Larry puts up with his trophy-wife’s obsession with texting and drinking coffee, because he, like her, is waiting for their inheritance. Larry and Traci, determined to stop Drayton from spending all her money, scheme to have her declared financially incompetent, but Drayton has a few more tricks up her sleeve.

The Majesty of the "Messiah" Fills Mission Santa Clara