Bright orange T-shirts and big picket signs marked the outside of the Northside Library on September 4 as about 230 community members protested the temporary restraining order that Santa Clara County filed against the City of Santa Clara, calling for construction on the library to stop. The library is 99.9 percent complete.

The large number of children participating in the rally attracted attention in the Rivermark Plaza. Drivers honked in support of the picketing youngsters as they loudly chanted, “Save our library!”

“This means that people are paying attention, and it’s not just about the adults but it’s about the children too,” says Kathy Watanabe, a library board foundation member. “The kids understand they [might] lose an important neighborhood asset.”

“I’m at the rally because I want the library to open,” says Lizzy Chu, a four year-old girl accompanied by her mother, Maureen. “I like to read books. I like to walk here, and I’ll come here a lot.”

Evie and Camille Jerdonek, ages three and five, respectively, arrived at the rally wearing signs listing the names of their favorite books.

“The love of learning brings our diverse community together so we need to have this library,” says Cindy Jerdonek, the girls’ mother.

Hillary and Braxton Chang, ages six and four, respectively, brought a cash donation for the library.

“I don’t want to drive over to the Central Park Library,” says Hollie Chang, the children’s mother. “I want a library that we can walk to. I would be really bummed and disappointed if this library didn’t open.” 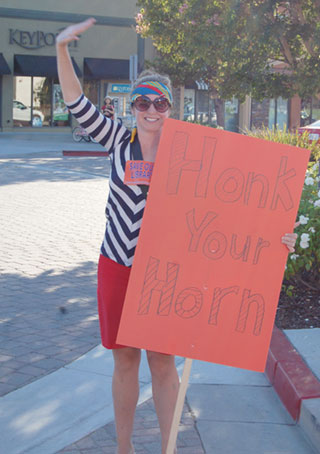 Also attending the rally was Helen Hsieh and Edison, her five year-old son.

“Edison and I have watched this library get built from the beginning,” Hsieh says. “It doesn’t make sense to not open the library.”

“I have an eight year-old granddaughter, and she’s excited about this library,” says Manny Domingo, a retired photographer who took pictures at the rally.

“The library is valuable because it’d be a place for children to study, read books, and [have access] to resources,” says Ajaipal Chahal, a picketing sophomore from Santa Clara High School.

“The library is 99 percent done, and it’s dumb that they say [the city] can’t finish this,” says Loretta Beavers, an avid reader picketing in front of the library.

“It’s incredible to see how passionate this community is,” says Maria Daane, executive director of the Santa Clara City Library Foundation and Friends. “I believe the politicians have the ability to solve this problem, and I’m hopeful they’ll do the right thing for their community.”

The Santa Clara RDA Oversight Board will announce whether the Northside Library is a “government purpose asset” at a public meeting on Monday, September 23 at 2 p.m. at the Santa Clara City Hall Council Chambers.

“If the oversight board agrees that the library is a government purpose asset, then the oversight board can recommend to the Department of Finance for the State of California that it allow the city to take the library back and operate it as they would have normally,” says Dan Beerman, public communications manager for the City of Santa Clara.