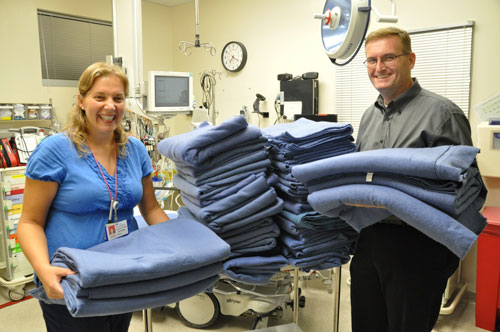 A chilly breeze wafted down San Francisco’s Market Street as Danijela Tomic, RN, BSN, started passing out bright blue blankets to a throng of waiting homeless people near the BART station entrance. Tomic, an Emergency Department nurse at Kaiser Permanente Santa Clara was bringing some warmth to the people of the street.

“Our church group from Santa Clara First Baptist does a give-away for the needy every year,” says Tomic, “but this is the first time I’ve had a chance to use the disposable ambulance blankets. At least they’ll keep people on the street a little warmer.”

The single-use, disposable, blue polyester blankets originally kept Kaiser Permanente patients a little warmer as they were transported to the Santa Clara Emergency Department by ambulance crews. On arrival, either the patient keeps the blanket, or more likely, leaves it behind in the emergency department and Kaiser Permanente has to dispose of it.

“We may throw away several hundred blankets each year,” says Jay Colas, RN, BSN, Service Director of the KP Santa Clara Emergency Department. “Even though they’re probably only twin-sized blankets, that’s a lot of extra trash.”

Colas says that for several years, he and other staff members were repurposing the blankets and finding alternative uses for them.

“For a while, I was taking a large garbage bag of gently-used blankets to the animal shelter as bedding for the abandoned animals,” says Colas.

Then last year, Assistant Manager Dan Freeman, RN, came up with the idea of washing the blankets and donating them to the Redwood Family House, a temporary homeless family shelter in his home town of Redwood City. He was able to collect about a hundred blankets, some left behind in the ED and some not.

“I’d ask some of the patients if they didn’t mind donating their blanket and they were always happy to do it,” says Freeman.

Freeman enlisted the entire staff of the ED to help him collect the blankets and keep them (even temporarily) out of the landfill. In return for collecting the blankets, Freeman had pizzas delivered to the staff conference room.

This year, the blanket mantle passed to Tomic, who lives in Santa Clara and attends First Baptist. Tomic wanted to add the blankets to her annual donation of food and clothing for the homeless.

“We take BART to the city,” says Tomic, “and it’s so sad, the homeless are shivering and waiting for us outside the BART station.”

Tomic collected more than 90 blankets from Kaiser Permanente Santa Clara’s ED, and says she became an expert at cleaning the discarded-and-gently-used coverlets. She made more than a few trips to a Santa Clara Laundromat.

“The blankets are polyester so they only take about nine minutes to dry,” says Tomic, looking proudly at a stack of neatly folded, fresh-smelling, blue blankets.

Freeman believes the blanket project is a “win-win-win” situation.

Staff is diverting the disposable blankets from the landfill (at least temporarily), they’re reducing Kaiser Permanente’s waste stream, and they’re bringing a bit of warmth to those who need it.

“We gave out all the blankets to the homeless in 30 minutes,” says Tomic.