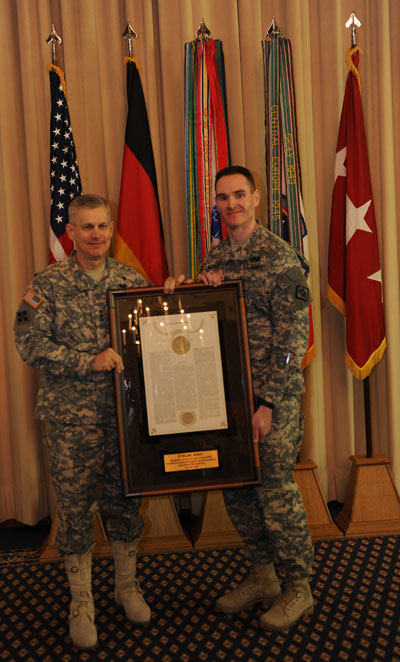 Murray was nominated while serving as a commander for 42nd Clearance Company, 54th Engineer Battalion, 18th Engineer Brigade out of Bamberg, Germany.

The GDMLA program was introduced in 1987 to recognize company-grade and junior warrant officers who demonstrate MacArthur’s ideals of “Duty, Honor, Country,” and have a proven record of extraordinary performance, leadership and achievement.

“This award is a testament to the Soldiers in the 42nd Clearance Company, 134 of the toughest and hardest working soldiers you will find in the Army,” Murray said. “It’s an honor to be here for them.”

Murray moves forward to Washington, D.C., to compete against junior leaders from other major Army commands, where only 25 officers and three warrant officers in the active, National Guard and Reserve Army will receive the award.

U.S. Army Europe is uniquely positioned to advance American strategic interests across Eurasia, building teams, assuring allies and deterring enemies. The relationships built during more than 1,000 theater security cooperation events in more than 40 countries each year lead directly to support for U.S. actions such as those in Kosovo, Iraq, Afghanistan, and Libya.