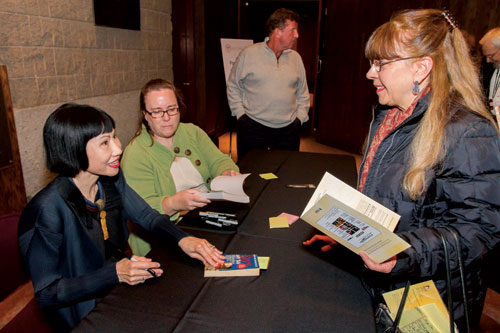 “Amy Tan is a jewel in the sparkling tiara of Bay Area writers,” says Ron Hansen, Santa Clara University (SCU) professor in the Arts and Humanities, introducing her at the Mayer Theatre January 17.

Tan began and ended her SCU presentation with a story, her story – “The Opposite of Fate: Memories of a Writing Life.”

Born in Oakland, Tan lived from 1964 to 1968 with her Chinese immigrant parents and two brothers in a duplex in Santa Clara. Then, tragically, the older of her two brothers and her father died of brain cancer six months apart.

“My father was perfect,” she says, as she draws the audience into her story. “People like that don’t make good characters because [as a writer] you don’t want perfect people. My mother, on the other hand, was not perfect.”

“I was the kind of girl wanting to do everything my mother expected me to,” continues Tan, whose novels explore the complex relationships of mothers and daughters. “The Joy Luck Club,” her first novel, was published in 1989 and made into a movie. “The Valley of Amazement,” her seventh novel, will soon be released.

“Tan is a consummate story teller. She has an intensely personal approach, with rich experience she feels compelled to share,” says SCU Director of Development Marketing and class of ’71 alumnus Jay Colombatto.

Yet nothing in Tan’s childhood predicted her success as a story teller. She got low SAT scores in English, and both Stanford and Berkeley turned down her applications. In 1985, when she began to write fiction “in an attempt to find meaning in life,” publishers rejected her stories.

“There’s no truth in what you’re writing,” she was told. Yet she persevered, attending a workshop at the Squaw Valley Community of Writers.

Tan’s advice for success in writing: Be part of a group such as a creative writing class, get a mentor, keep a journal, and be willing to revise.

“I really loved her comment about keeping a journal. It inspires me to record my thoughts not just the things I do from day to day,” says SCU sophomore and English major Mary Robinson. “I have a journal but it’s just sitting there empty now.”

“Her enthusiasm when she tackles something impressed me. She said she redoes it a hundred times, modifies it,” says Santa Clara resident and SCU class of ’56 alumnus Bernhard Henschke, who is writing his life history.

Tan’s mother, Daisy, who died in 1999, moved Amy and her brother from Santa Clara to Switzerland. After finishing high school there, Tan attended San Jose City College and received bachelor’s and master’s degrees in English and linguistics from San Jose State University.

Tan’s father, John Tan, had graduated from SCU with a master’s degree in engineering.

“My father would have been so proud that I’m here,” says Tan at the end of her presentation, graciously accepting a gift from SCU President Michael E. Engh, S.J.

For more about the Santa Clara girl, visit her website: www.amytanauthor.com.