Santa Clara is facing another lawsuit, this time from developer Republic Metropolitan (ReMet) over the City Council’s 2021 decision not to grant a third extension on a 2018 exclusive negotiating agreement (ENA). The project was a student housing and residential development on the CalTrain parking lot jointly owned by the City and VTA.

The ENA expired in August 2020, but the City approved a third extension that month and was waiting for VTA’s approval. In November 2020, the City advised VTA that the project was dead. Since then, ReMet has been asking the City to reopen the negotiations for an ENA extension.

The crux of the dispute is whether the project was subject to the requirements of California’s Surplus Land Act (SLA), passed in 2019. Former Santa Clara City Attorney Brian Doyle believed that the project was subject to the SLA. ReMet’s attorneys argued that it wasn’t because of exemptions for development agreements that predated the law, provided the final disposition of the property is completed by Dec. 31, 2022.

ReMet alleges the Council improperly made a decision to shut down the project during an Oct. 15, 2020 closed session meeting that was improperly described as real estate negotiations.

The developer initially filed its complaint with the City in November 2021. After receiving no offer from the City to reopen the negotiations, the developer took its case to court in a document characterized by flowery language more characteristic of swashbuckling novels than legal briefs:

“Away from the prying eyes of the public, ReMet and all of the numerous citizen stakeholders, and without even extending the courtesy of a blindfold and a cigarette, [Santa Clara] …voted the summary execution of four development projects,” opens the 600-plus page complaint. (See Below) 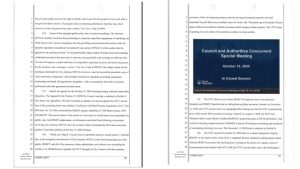 ReMet accuses Santa Clara of breach of contract; “flagrant violations” of law and “malevolent objectives;” “negligent misrepresentation” in allowing the developer to believe there were no impediments to the projects’ approval; and violating the California Housing Accountability and open meeting laws.

The developer is also charging that Santa Clara violated California’s housing laws by arbitrarily blocking a housing development project that conformed with the General Plan and would have provided affordable housing. ReMet says that it has spent $3.5 million on the project — including feasibility studies and design plans before it had any commitment from the City or VTA.

City Politics
Author Erika TownePosted on November 28, 2022
During the Planning Commission meeting on Oct. 26, the Commission approved the tentative subdivision map for the Development Area Plan (DAP) for the Related...
SPONSORED