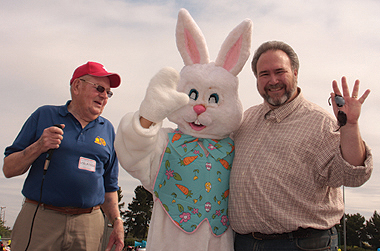 With the exception of Santa Clara’s Christmas teddy bear, there are few city traditions that can claim a pedigree as long as its annual Easter egg hunt, which dates back almost 80 years.

“Several hundred children of this city [Santa Clara] will take part in the first annual Easter egg hunt conducted by the Santa Clara American Legion Post No. 419 and members of the Ladies Auxiliary on Easter Sunday morning,” the March 17, 1932 San Jose News reported.

In those days it was definitely a different event. “Prizes of live rabbits and candy will be concealed in tall grass of a nearby farm.”

Eight years later, the event was still put on by American Legion Post 419, although live rabbits were apparently a thing of the past – much to parents’ relief, undoubtedly. “All children wishing to participate are asked to meet at the Fremont School grounds,” wrote the March 22, 1940 edition of the San Jose News. “They will be picked up there and taken to the place where the legionnaires have hidden the eggs.”

In 1970 the event featured a hat parade, and an egg-throwing contest followed the hunt. And 1994 saw the arrival of the over-involved sports parent, when unruly adult behavior sounded an unpleasant note.

“The rules are that children are the only ones who enter the roped-off areas,” reporter Cleo Stuckrath wrote in the April 6, 1994 Santa Clara Valley Weekly. “Unfortunately, some parents go into the roped-off areas and instead of letting their child pick up their own eggs, the adults grab off eggs themselves. Obviously when the little ones compete with adults, they lose.”

Over the years, the hunt has been held rain or shine. In 1998, nasty weather threatened to dampen more than spirits, as reporter William Jeske wrote in the April 16, 1998 Santa Clara Vision.

“Droves of umbrella-brandishing and slicker-donning people congregated at Central Park at 9 a.m. where children were lining up to have their picture taken with the Easter Bunny,” wrote Jeske. “Just as soon as [Mayor] Nadler told everyone to collapse their umbrellas and yelled ‘go,’ the rains turned from a sprinkle to a steady drizzle.”

"Best of the Best" Gala Brings Community Together

Community
Author Erika TownePosted on May 29, 2020
Local hospitals are taking part in a nationwide study to try and find a better treatment for patients battling COVID-19. “The goal of the...

Community
Author Cynthia ChengPosted on July 6, 2011
Jennifer Juanes was a beautiful woman. In 2006, when Juanes was only 20 years old, she was diagnosed with acute lymphoblastic leukemia, also known...
SPONSORED