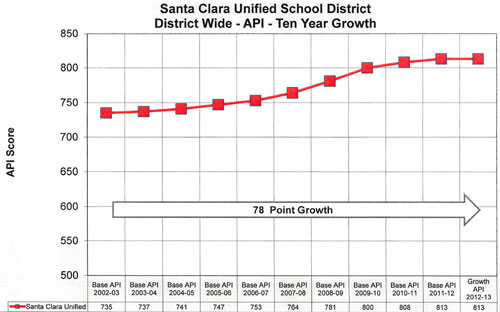 It sometimes seems like half the school year is consumed by avalanche of student testing, while the other half is consumed by analyzing the avalanche of scores. And although California has done away with the Academic Performance Index (API) scores that make a house cost more in Cupertino than Santa Clara, they are not leaving without a swan song.

Thursday’s Santa Clara Unified (santaclarausd.org) school board meeting will review API scores, as well as the Adequate Yearly Performance (AYP) indices, plus the Content Standards Test (CST) results from the 2012-2013 school year. The bottom line is that averages are improving. You can download the presentation with all the charts at www.santaclarausd.org/documents.cfm?id=1232.22566. Select the 2013-2014 folder and look for Addendum Bd Agenda Pkt 10-24-13.pdf. Sound complicated? You’re right – it is.

Discussion of Policy on Board Member Authority Returns to Agenda

Also on this Thursday’s agenda is continued discussion of the 9200 series of the SCUSD Board policies specifically regarding the “Limits of Board Member Authority.” This has been argued about at several board meetings in recent months.

Trustee Andy Ratermann has been the strongest voice for a strict and explicit chain of command. In his view, the Superintendent is the only district employee who works directly for the board. Board members have no executive or investigative authority, nor do they have individual authority to speak for the district.

Trustee Ina Bendis, on the other hand, has argued at length for a policy that allows individual board members more expansive authority to intervene in district business, employee investigations, and educational activities.

“The Governing Board recognizes that the Board is the unit of authority over the district and that a Board member has no individual authority. Board members shall hold the education of students above any partisan principle, group interest, or personal interest.

“Unless agreed to by the Board as a whole, individual members of the board shall not exercise any administrative responsibility with respect to the schools or command the services of any school employee. Individual board members shall submit requests for information to the Superintendent. Board members shall refer Board-related correspondence to the Superintendent for forwarding to the Board or for placement on the agenda, as appropriate.

“Individual board members do not have the authority to resolve complaints. Any board member approached directly by a person with a complaint should refer the complainant to the Superintendent or designee so that the problem may receive proper consideration and be handled through the appropriate district process.

“Board members, in general, but specifically those who have children in district schools, should be aware of their role as a Board member when interacting with district employees. They should realize the difference between being a parent or community member and being a board member.”

Next month Santa Clara voters in the south of Pruneridge neighborhood will be asked to vote on extending an $85 parcel tax for the Campbell Union High School District (www.cuhsd.org).

The neighborhood, whose students must cross both I-880 and I-280 on their way to school, has repeatedly petitioned the County Office of Education to join the rest of Santa Clara in the SCUSD. The most recent refusal came last spring, when the County Board of Education supported the boundary change but the Committee on School District Organization denied the request for the second time in three years.

“The state criteria [on boundary changes] as interpreted by the county committee, are virtually impossible to meet,” said neighborhood resident Mike O’Halloran at the time. “They create a situation where it’s impossible to make any change, no matter how much the underlying realities change. It was very disappointing.”

Some neighborhood residents may take that disappointment to the polling booth with them in the coming parcel tax vote. Campbell districts continue to receive $925,000 from Santa Clara property taxes to serve 65 elementary school students, and $635,000 to serve 15 high schoolers. The full report is at www.sccoe.org/supandboard/countycommittee/agmin/13/Final-Report_May-2013.pdf.

“The court is satisfied that the Legislature intended to provide this extraordinary power to override local zoning only to ‘school districts and junior college boards’ and not to local county offices of education…County boards of education generally do not fulfill the same unique educational functions which are the duty of school districts.”

There is such difference between the two agencies’ functions, Bondonno wrote, that “if the Legislature had intended to grant the power to override local zoning to county boards of education, the Legislature would have so stated. It has not done so.”

Charter schools – which are publicly funded but exempt from many requirements of the state education code including governance by an elected board of education – typically get their facilities from the school district in which they operate. Rocketship operates on a different model, in which they find vacant parcels and quickly construct their own buildings. A final ruling is expected in November. The case number is 1-13-CV-241695.