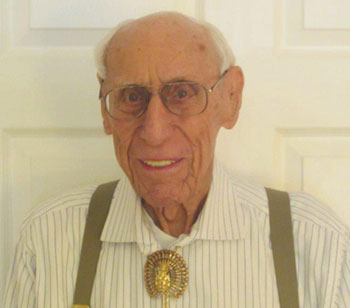 The Santa Clara City Library Foundation & Friends recently received a large donation from Ray Edinger to rename the Central Park Library’s Cedar Community Room in honor of his wife, Margie Edinger, who passed away in April. Ray and Margie were 57-year residents of Santa Clara, raised three children, and have done much to help the city. Mr. Edinger was a trustee of the Jefferson School District in the 1960s, and served as chair of the construction committee of Santa Clara United Methodist Church (SCUMC) when Santa Clara’s Liberty Towers, the large senior housing development near Franklin Square, were built.

Mrs. Edinger was a member of the Order of the Eastern Star, Islam Temple 25 Daughters of the Nile, and heavily involved in the children’s programs at the SCUMC. She was also part of a small group of parents and interested individuals that raised funds and supported the Santa Clara Vanguard Drum and Bugle Corps during its early years. They raised three children in Santa Clara.

Asked why he chose the library to honor his wife’s legacy, Mr. Edinger said, “My wife was a little girl in Homestead, Pennsylvania during the depression. In the summer, there was nothing for the children to do. My wife spent all her time at the library, which also had a swimming pool behind it. It was a wonderful thing for her as a child.” Mr. Edinger prefers the amount of the gift not be disclosed, however, it is the largest donation from an individual that the Santa Clara City Library Foundation & Friends has ever received. The Cedar Community Room at the Central Park Library was renamed the “Margie Edinger Community Room” at Mrs. Edginer’s Celebration of life on June 2.