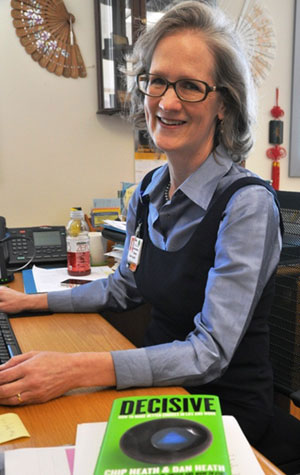 Dr. Diane Craig, Hospital Medicine at Kaiser Permanente Santa Clara, knew there was a killer stalking the halls of her hospital. It was stealthy and struck quickly. And Craig knew it could be stopped. How she and her team approached this killer named “sepsis” is becoming a model for the nation.

A modern detective story? No, but it is one of the amazing case studies that support a best-selling business book called “Decisive: How to Make Better Choices in Life and Work”, by Chip and Dan Heath (Crown Business 2013). The case study shows how Kaiser Permanente decided to reduce patient death from sepsis through earlier identification and consistent interventions, using many of Craig’s ideas.

“Sepsis is the result of a serious infection and the body’s response to that infection which can move very rapidly,” says Craig, a physician of The Permanente Medical Group since 1988. “A patient looks fine, until, well, they don’t look so fine anymore. But by then, it may be too late, damage is being done and the treatment interventions themselves have their own risks. The key is to think about sepsis early on and intervene before things deteriorate into septic shock.”

Every year, sepsis causes millions of deaths around the world. It occurs when an infection in one part of the body causes an inflammatory response that can spread quickly to multiple organs elsewhere often causing catastrophic failures. For example, a lung infection like pneumonia diagnosed at noon can cause kidney shutdown or brain damage by dinner. Severe sepsis and septic shock are treated with powerful antibiotics, large infusions of IV fluids, and other intensive care interventions that have their own dangers. Up to 35 percent of patients with more severe stages of sepsis still die despite all available treatments.

The authors of “Decisive” write that while Kaiser Permanente’s heart attack deaths were low nationwide because of aggressive treatments, sepsis mortality remains troubling. They point out how medical leaders at Kaiser Permanente saw how Dr. Craig and her colleagues at KP Santa Clara were making progress reducing sepsis deaths and worked to spread this work to all of the KP hospitals.

“Sepsis is a very under-recognized condition, especially in the early hours of onset,” says Craig. She read a 2002 study by Manny Rivers which showed that early interventions were the key to saving lives. The KP Santa Clara Sepsis Team embarked on a concerted effort to use these interventions consistently. It was working, but there were still situations when sepsis wasn’t recognized until it had reached a more serious stage.

“Our first concern as physicians is to ‘Do no harm,'” says Craig, “So doctors are reluctant to treat patients with ‘mild’ sepsis as aggressively as the 2002 Rivers study called for. So we got our Division of Research to come up with a simple pocket card for our doctors and nurses, showing them the risk an individual sepsis patient faces, based on the results of an easily available blood test.”

Craig was influential in putting in place triggers, including prompting physicians to check ‘lactate’ levels, when evaluating patients for possible sepsis.

“Lactate levels are one indicator of the severity of sepsis and can help us quickly identify sepsis patients who need more aggressive treatment,” says Craig.

Part of that aggressive treatment is a special “Sepsis Team”. An overhead paging system alert mobilizes this multi-disciplinary group to the patient’s bedside to provide the specialized care that is needed.

The protocol worked. The methods at Santa Clara contributed to an enterprise-wide sepsis initiative that has been rolled out to the entire Kaiser Permanente system, and the writers point out that now, Kaiser Permanente’s sepsis mortality rate is nearly 25 percent lower than the national average.

“This is one of my favorite stories in the book,” says writer Chip Heath, who is a professor in the Graduate School of Business at Stanford University. Craig’s story shows that when you decide to solve problems, you can often look to someone in your own system (company, community) that has the answers.

“It has been an amazing journey to be a part of,” says Craig, whose Sepsis Team continues to seek improvements in care, because, “sepsis is still a stealthy killer and we must all be on the watch for the sometimes subtle signs that a patient is getting into trouble with what at first seemed like a simple infection.”

Community
Author Carolyn SchukPosted on February 18, 2015
Everyone wants to be self-supporting and contribute to the community, but some need more support than others. That’s where Pacific Autism Center for Education's...

Community
Author Diane AndrewsPosted on March 23, 2016
A luxury car dealership is an unlikely venue for a pajama party. Nonetheless, Lexus of Stevens Creek, San Jose, partnered with the nonprofit Pajama...

Community
Author Cynthia ChengPosted on December 27, 2017
At the regular location for Tani Cooking Class (5259 Stevens Creek Blvd.) on Dec. 17 “A Taste of France” was on the menu. It...
SPONSORED