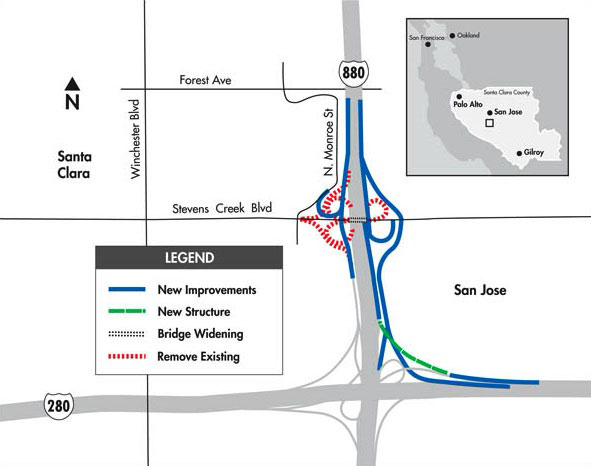 Santa Clara is moving forward with two projects to improve pedestrian and bicyclist safety and visibility, thanks to two federal grants the city applied for over two years ago.

The first, a $1.3 million Congestion Mitigation and Air Quality (CMAQ) grant from the U.S. Department of Transportation (DOT), will enhance safety and visibility of the on-street segments of the San Tomas Aquino Creek Trail – on Cabrillo, Calabazas and Pomeroy. This includes signs, better pavement and sidewalk markers, colored bicycle lanes, in-pavement lighted crosswalks, curb ramps and changes to Calabazas Blvd. to make it safer and more bike- and pedestrian-friendly – what’s called a “road diet.”

The second, also from the DOT, is a $563,000 Highway Safety Improvement Program (HSIP) grant for safety and traffic signal improvements at the Benton and Pomeroy intersection. These include an upgraded traffic signal with protected left turn phases for all approaches to the intersection; new left turn lanes on Benton; and curb, gutter and curb ramp construction.

The interchange at 280/880 and Stevens Creek Blvd. is indisputably one of the worst in the area. But that’s about to change, as VTA begins a $65 million makeover for the half-century old interchange next month.

“It is rewarding to finally see this contract awarded and know that construction will soon begin in earnest,” says County Supervisor Ken Yeager. You can follow the progress at www.vta.org/projects/280_880_stevens_creek_blvd_improvements/index.html.

If there’s any one place you can have your finger on the pulse of city development, it’s on the Santa Clara Planning Commission. And right now there’s an opening for a new commissioner.

The seven-member citizen commission is one of the city’s most influential; advising the City Council on every proposal for development in the city – from zoning variances and architectural reviews to major development projects. The commission meets 15 times per year and its next meeting is September 26.

Applications are due Wednesday, November 21 at 5:00 p.m. The appointment will be made during the November 27 City Council meeting and applicants will be interviewed during the regular meeting (7:00 p.m.). To apply, contact the City Clerk’s office at (408) 615-2220 or download the application at santaclaraca.gov/index.aspx?page=378.

The September 11 Council meeting was adjourned in memory of long time Santa Clara Director of Planning and Inspection, Geoff Goodfellow. “We will miss him a lot,” said Vice Mayor Lisa Gillmor. Also remembered in that evening’s adjournment were the victims of the Sept 11, 2001 terrorist attacks.