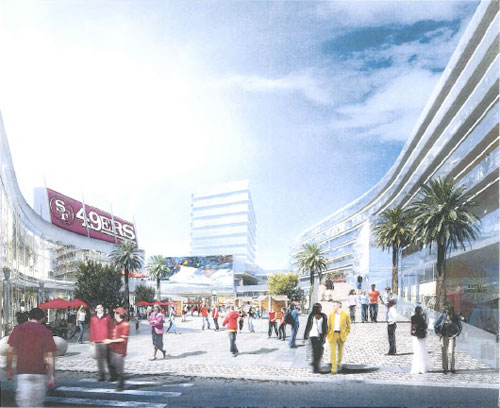 With the 49ers new Levi’s Stadium coming closer to completion by the day, the stars could not be better aligned for adding a missing link to Santa Clara’s landscape: an urban shopping and entertainment destination on the City’s Northside. That’s the message that Santa Clara City Manager Julio Fuentes will be bringing to a City Council public study session on Oct. 30.

“I’m thrilled to see our longtime vision for creating a distinctive destination come to fruition,” says Santa Clara Mayor Jamie Matthews. “Not only will this be a tremendous opportunity for shopping and entertainment options within Santa Clara, it also brings the city new revenue generated by our investment in Levi’s Stadium.”

At Wednesday’s meeting, the Montana Group and the Related Companies will introduce their initial development concepts for 225 acres of city-owned land across Tasman Drive from Levi’s Stadium: Centennial Gateway from Montana Property Group and Lowe Enterprises, and The Related Companies’ City Place Santa Clara. The proposals were published on the City website Friday evening.

Although the two proposals are separate projects, their proximity offers a lot of potential synergy between the two, and dictates cooperation between the developers. “We felt it was needed to master plan the area,” says Fuentes. The area will be accessible from both Tasman and Great America Parkway. However, the two projects will be separate development agreements and have individual Environmental Impact Reports (EIRs).

The developers, says Fuentes, have designed a total project that’s a “city within a city.” The combination of integrated retail, entertainment, and new office and residential development will “add a component we certainly need in the city. It will be a signature development.”

“We have a huge daytime population [office workers],” says Fuentes. “This [development] gives folks who work here an opportunity to have lunch, to shop [in the city]. It also gives us a nighttime destination and places that will attract the people who visit our convention center. It will be regional magnet.”

The area won’t become just a magnet for visitors to Santa Clara, says City Council Member Teresa O’Neill. “It’s also our opportunity to create a blueprint for smart development offering a variety of transit options, and provide significant new options for people to live close to where they work.”

In 2011 the Council approved an 18-month Exclusive Negotiations Agreement (ENA) with the Montana Property Group for development on 9.5 acres of city-owned land on Tasman Drive directly across the street from the 49ers stadium.

Another way to put that is that Gateway will incorporate features of urban centers such as San Francisco or Manhattan, to offer the people who live and work there walk-able convenience and variety. The development is designed to provide a continuous and inviting path to the larger Related Development that will be adjacent.

The development team – a partnership between Montana Property group and Lowe Enterprises – hopes to break ground in the summer or 2014, and be open for business in time for Super Bowl L in 2015. The developers estimate the cost at $400 million, according to Lowe Enterprises Senior VP Hanns Lee.

About six months ago, the Council unanimously approved an ENA with the Related Companies to develop a proposal for developing a 220-acre mixed-use development on what is currently the city’s golf course and Santa Clara PAL’s BMX track – which has already been considering a move for about a year.

Related is proposing a four-phase development of 215 acres to ultimately include entertainment venues, restaurants, retail, residential, office and public space – in effect, an entire neighborhood that would integrate into the stadium and convention center area. “This [project] is very much about place-making,” says Related VP Bill Witte.

The focus of the project in the first phase would be the 89 acres adjacent to the Lowe development on Tasman. This will be the core of the development, with a central park space and theater complex surrounded a one-to-two story shops, markets and restaurants. Larger stores, 4-to-14 story office buildings, a 9-story hotel, and 5-story residential buildings will surround that central core.

The remaining three parcels right now are designated for office and larger retail development. “The office space on the periphery can be developed in response to market demand” at the time,” explains Witte. “We have built a lot of flexibility into our plans to take advantage of the opportunities that may come up for performing and entertainment venues depending on if funding is available.”

Related currently estimates the development cost possibly topping $1.5 billion. Some of that cost is related to the challenges of building on landfill – the site is the city’s former dump – and most of the structures in City Place will be on top of platforms over the landfill.

The Council study session starts at 6 p.m. at the Central Park Library’s Redwood Room, 2635 Homestead Rd. Links to the agenda and presentations can be found at santaclaraca.gov/index.aspx?page=452 by scrolling down. Wednesday’s conversation will also include:

If you’ve read the Mercury News recently, you might believe that Santa Clara is about to – quoting songwriter Joni Mitchell – “pave paradise and put up a parking lot” at the city’s not-quite 20 year old Ulistac Natural Area. But the implication that bulldozers are readying their blitzkrieg assault on the park is flat-out wrong – despite its headline-making richness – as city officials continue to emphasize.

However, public interest in Ulistac opens an opportunity for education and sets an example to drive reclamation of more California history and environment in the future, according to state archeologist Mark Hylkema, who probably knows more about the archeological and environmental history of the area than just about anyone else alive.

A Santa Clara Valley native, Hylkema has devoted more than 30 years to the area’s archeology. Hylkema was the archeologist who found the third Santa Clara Mission site, and played a central role in re-routing the El Camino to protect it. He’s also the author of several academic articles on the area’s archeology, and regularly teaches classes at Foothill College (www.foothill.edu) on North American and California Indians.

“I have a lot of respect for Santa Clara City planners,” he says. “It’s one of the few cities with an archeological ordinance. The city has measured up pretty well.” He adds that Santa Clara was “pretty smart” in making the investment to own a lot of its undeveloped land, thereby maintaining significant control over its use.

The Ulistac Natural Area reclamation project restored those 40 acres to “a wilderness it never was” since the first Homo sapiens arrived, Hylkema explains. “We have an emotional issue over a park that was a landfill. It has become a restored environment and that is what we cherish.

“Ulistac is building an awareness by reconstructing habitat and reintroducing wildlife,” he continues. “Global development destroys the natural ecology and environment we depend on. So it becomes important we can reengineer landscapes to preserve our health and environment. Ulistac is just that.”