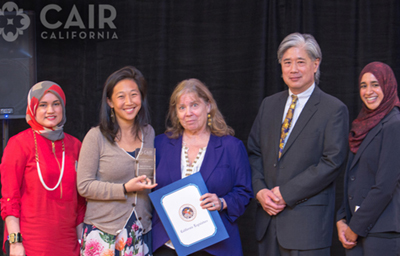 Last month the Santa Clara-based Council on American-Islamic Relations of the San Francisco Bay Area (CAIR-SFBA) had more to celebrate than just the organization’s 19th anniversary at its annual dinner and fundraiser at the Santa Clara Marriott.

Little more than a month before, the civil rights group announced the settlement of a three and a half year EEOC lawsuit against Abercrombie & Fitch over the firing of two women who wore traditional Muslim headscarves – hijabs – at work. As part of the $71,000 settlement (plus attorneys’ fees), the high fashion retailer will now allow head scarves and, further, create an appeals system for workers claiming they’ve been denied reasonable religious accommodations.

“It’s fundamental to the democracy that we all aspire to expand the horizon of freedom,” said Santa Clara Mayor Jamie Matthews in his welcome remarks for the evening. At the event, CAIR presented its Enhancing Understanding award to KTVU video journalist Robert Handa, and its Civil Rights Heroes award to the Legal Aid Society-Employment Law Center. CAIR-SFBA’s Executive Director Zahra Billoo also received a commendation from the City of San Jose for the organization’s civil rights advocacy, presented by Council Member Pete Constant.

“We come here to thank you for all you do in the community,” said Constant. “We are so fortunate to have a community of so many cultures. What you do here is for all the people in the Bay Area.”

The evening’s keynote speaker was journalist Max Blumenthal, who is also currently on a tour promoting his latest book, “Goliath: Life and Loathing in Greater Israel.” Blumenthal, who charted the take-over of the Republican Party by what right-wing Christian theocrats, now warns that this faction, having lost same sex marriage as an issue, will focus increasingly on anti-Muslim activism.

Further, Blumenthal says, the “conspiracy of silence” about the Israeli-Palestinian conflict that runs through the entire U.S. political spectrum is a national “moral failure,” faulting President Obama for “pandering” to Israeli Prime Minister Netanyahu.

Hailing CAIR and its supporters for not being afraid to challenge the status quo, Blumenthal concluded, “Be mindful that the darkest hour comes before dawn. Let’s lead the way.”

CAIR, now America’s largest Muslim civil liberties and advocacy organization, was founded after the 1995 attack on the Murrah Federal Building in Oklahoma City, when many commentators initially and wrongly assumed Muslims were the likely perpetrators of the bombing. In the last year, the CAIR-SFBA (ca.cair.com/sfba.) office provided free legal help for over 200 people facing discrimination.

Like the mummy’s curse, American bigotry’s clichés have remarkable powers of longevity. From 18th century New Englanders’ obsession with Masonic conspiracies, to the 19th century’s pervasive anti-Semitism and anti-Catholicism, to “Yellow Peril” anti-Asian hysteria in the early 20th century, to today’s anti-Muslim hate mongering, the words and sentiments are interchangeable.

Consider the following selections from an editorial in an 1854 edition of the Dubuque Weekly Observer, in response to an editorial by the Dubuque Herald accusing the Observer of anti-Catholic bigotry:

“No Roman Catholic Bishop in this land is a citizen of the United States—they are all sworn subjects of a foreign prince, the Pope of Rome.”

“The operations of the Leopold Foundation*…has for its object the extinction of Republicanism in America, its Jesuit managers deriving their funds…from those whose sins are, for this purpose, forgiven.”

“Popery stumbles out of the ‘dark ages’ into the light of the nineteenth century; thus striking with blind despotic biggotry [sic] at the principles that lie at the foundation of our government.”

“[The Herald] may attack Protestantism, sap the foundations of our …school system, burn bibles…under the cover of a plea that they are seeking to enlarge…civil and religious liberty…but let a breath escape the lips of an accursed heretic or backslidden saint against Roman Catholicism or Jesuitism and the heart-rending cry of persecution is at once raised…”

Just change “Catholic,” “Pope,” and “Jesuit,” to “Muslim” or “Islam,” and you could find virtually the same statements coming from anti-Muslim propagandists like Quran-burning Florida Pastor Terry Jones; recently arrested for transporting hazardous materials – a truckload of gasoline-soaked Qurans – and unlawfully carrying a firearm while on his way to another planned conflagration.

* The St. Leopold Society was a 19th century Austrian missionary society that remains to this day – along with the Freemasons, Illuminati, and Zionist Bankers – a favored bogeyman of conspiracists and tin-hatters.

City Politics
Author Carolyn SchukPosted on July 25, 2012
The next catastrophe to wallop municipal budgets will be a shortfall in CalPERS returns, adding to the already-escalating payments levied by the California public...

City Politics
Author Carolyn SchukPosted on June 2, 2019May 30, 2019
Santa Clara is not the only college town in California that has mini-dorms. And like Santa Clara, other cities have attempted to block them...
SPONSORED