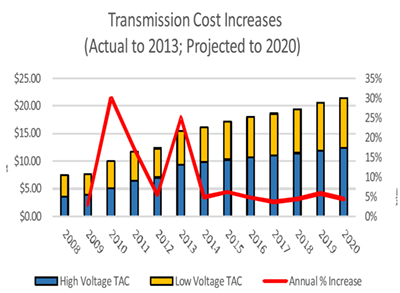 A five percent increase in electric rates, driven by an increase in Silicon Valley Power’s operating costs, got the go-ahead from the Santa Clara City Council at its Oct. 29 meeting. Final approval is slated for the Nov. 19 meeting. The increase will bring the utility an additional $110 million in 2014 and $122 million in 2015, and help SVP keep its A+ bond rating. The city-owned utility’s last rate increase was in 2011.

Costs are increasing as a result of several factors, SVP Director John Roukema told the City Council on Oct. 29. One of the largest is an increase in energy purchasing and transmission costs – which have doubled in the last six years and are up 10 percent over the last year alone.

Other factors include the state mandate to increase the percentage of power generated from renewable sources, greenhouse gas reduction programs, and capital equipment maintenance and replacement to maintain the utility’s 99.995 percent reliability. Further, the utility faces higher costs for its San Juan generating plant in New Mexico, to clean up the 1981 plant’s emissions and replace its coal-burning units with natural gas by 2017. In addition, a dry year means less power from the city’s hydro generation plants.

However, looking ahead over the next five years, the cost curve will start trending downward. The utility’s new phase-shifting transformer will save the city millions in transmission costs through increased efficiency and reliability, and the price of electricity from renewable sources – solar, wind, hydro, and landfill gas – is also dropping.

Even with the increase, Santa Clara’s overall utility costs will remain lower than neighboring cities, noted Roukema. And Chamber of Commerce President Steve Van Dorn provided a reinforcing anecdote about Santa Clara-based Arista Networks. “Even thugh their lease is going up,” he said, “they’re staying in Santa Clara because they will save $1 million on their electric bill.”

Santa Clara city staff is working on a plan for using the municipal golf course for additional parking for stadium events, reported Assistant City Manager Alan Kuratori at the City Council’s Oct. 30 study session. The plan is modeled after a similar one used for Rose Bowl in Pasadena, and utilizes best practices developed there to protect the golf green.

Currently there are executed contracts for 11,000 parking spaces, pending contracts on 5,000 more, and negotiations underway for an additional 4,000. The golf course could provide up to 5,000 more spaces. All capital costs will be funded by the 49ers. If Related’s development proposal goes forward for the golf course land, the city anticipates that the phased development would allow the parking spots to be retained somewhere on the site, said Kuratori. The final plan will be presented at the Nov. 19 Council meeting.

Santa Clara’s Parks & Recreation Department has had some informal meetings with International Swim Hall of Fame CEO Bruce Wigo about moving the museum to Santa Clara, and including that in the current effort to rebuild the Haines International Swim Center. The ISHOF’s lease with Fort Lauderdale, Fla. expires in 2015.

“There are two questions for council consideration,” said Parks & Recreation Director Jim Teixeira at the Oct. 30 study session. “Should we invite ISHOF to come to Santa Clara? If yes, then we need to ask for a proposal. Second: Should we co-locate ISHOF at ISC?” If the city decides to do this, a new design incorporating both facilities, a joint capital campaign, and new operational and business plans would all be needed.

The Council favored giving the idea a formal review, and City Manager Julio Fuentes said that his office would investigate tax exempt financing for the project.

Another mixed-use project is being proposed for Santa Clara east of El Camino, on Monroe near Lawrence Expressway. The Irvine Company is proposing a mixed use development on a 16-acre parcel at the corner of French and Monroe Streets. Irvine’s proposal includes 825 residential units, 44,000 sqft of retail, and 17,000 sqft of “amenities.” To go forward, the parcel’s industrial zoning must be changed.

There’s a scoping meeting scheduled Nov. 14 at 6 p.m. at City Hall, which includes a description of the project and offers an opportunity for stakeholders to identify issues to be covered in a project EIR. The lead planner on the project is Yen Chan, YChen@santaclaraca.gov, 408-615-2450.

Last month, the Santa Clara County Board of Supervisors recognized that the unwinding of redevelopment is turning out to have more dimensions than the black-and-white of the legislation text, and the Board approved a resolution, introduced by Supervisor Ken Yeager, recommending that the legislature exempt the nearly-completed library from the clawback provisions of the 2011 law.

There’s reason to expect that things might turn brighter from this point, with the county’s focus changing from clawbacks to cooperation, judging from a recent conversation with newly-elected County Supervisor Cindy Chavez. “We have to figure out where our shared opportunities are,” she said. “Julio Fuentes and the Santa Clara City Council have been very open in talking about how to move forward.”

That’s certainly something most would agree is a positive step.

To commemorate the 50th anniversary of John Kennedy’s death, one of the U.S.’s best-known constitutional lawyers will speak locally about the Kennedy assassination theories that continue to fascinate us to the present day.

It’s an interesting coincidence that some of the early land use decisions that paved the way for the now-blossoming Northside of Santa Clara were made exactly 50 years ago. In Oct. 1963, former Mayor Larry Fargher had just been appointed to the City Council to fill a vacant seat. The freshman council member cast his very first vote against approving some new housing tracts on the Northside, similar to Sunnyvale’s Tropicana and Lakeview Villages.

Instead, the Council majority voted for a bigger vision for the Northside. It was a vision that started with Santa Clara buying the land (some of which is the subject of redevelopment dissolution county clawbacks), and creating a master plan for the development that has unfolded there over the last 30 years – high tech businesses, a growing convention center, and now an NFL stadium.

And, with Related Companies’ and Montana-Lowe’s new development proposals, it doesn’t look like the momentum is likely to stop any time soon.

City Politics
Author Erika TownePosted on May 17, 2022
A plan to help Santa Clara deal with the implementation of SB 9, the new state law that allows single-family homeowners to divide their...

City Politics
Author David AlexanderPosted on May 11, 2022May 16, 2022
Santa Clara’s City Council approved a new housing development on Pomeroy Avenue despite a lack of support for the plan. Plus, council members went...
SPONSORED