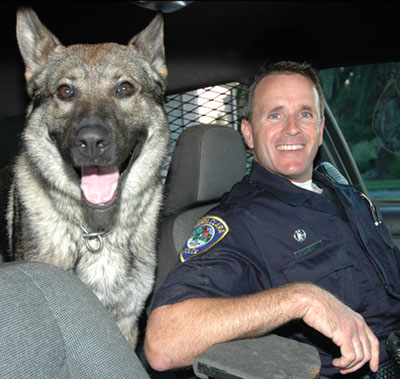 K-9 Ivo Retires After Nearly 7 Years on the Force

Last week’s City Council Meeting recognized the retirement of a member of what is perhaps Santa Clara’s most beloved public safety unit. K-9 Ivo, who joined the force in 2006, is going to a well-deserved retirement with his partner Mike Horn, who recently took a position with the Roseville PD. The pair worked together for Ivo’s entire career.

K-9s are some of the force’s most special members, says SCPD Chief Mike Sellers. “Our program has been tremendously successful. They’re a wonderful asset for local law enforcement and the community. Santa Clara’s K-9 units also support other local police departments on occasions when their K-9s are off-duty.

The Santa Clara City Council unanimously passed a statement of support for a settlement agreement between Hyatt Regency Santa Clara, and UNITE HERE (UH) in hopes of ending an ongoing labor dispute at the hotel – a critical and highly visible part of Santa Clara’s booming Northside.

The union, a member of the Change to Win labor federation, represents more than a quarter of a million workers nationally from a variety of service industries. UH has been seeking to organize Hyatt employees for several years.

The national agreement between Hyatt and UH provides secret ballot elections that will be held under the direction of an independent third party arbitrator. However, Hyatt Santa Clara isn’t a direct party to the agreement. By making a statement of support, the City Council is urging the Haytt to conform to the agreement terms.

The heart of the dispute lies in two words: card check. Also known as “majority sign-up,” card check streamlines union certification by allowing workers to indicate that they want to be represented by a union by checking an authorization card – instead of by holding an election.

Unions want it and employers, unsurprisingly, don’t. Understanding why requires a deep dig into the nitty-gritty of labor law.

Federal law specifies a two-step process for certifying unions. When 30 percent of employees sign a petition or authorization card asking for representation, the NLRB schedules an election. Supporters of card check say that employers can endlessly stall these elections.

Combined with poor enforcement and minimal penalties for employers’ unfair practices, and limits on union organizing activities and practices such as wildcat strikes and secondary boycotts, this stacks the deck in favor of employers, unions say.

When confronted with union organizing, three quarters of U.S. employers hire these consultants to conduct sophisticated campaigns, London School of Economics labor expert John Logan wrote in a 2006 article in the British Journal of Industrial Relations.

While card check can short-circuit employer obstructionism, some say it just changes the whip hand from employers to unions. “By forcing workers to sign a card in public – instead of vote in private – card check opens the door to intimidation and coercion,” says the U.S. Chamber of Commerce on its website.

In Santa Clara, the ongoing dispute over card check “has resulted in frequent demonstrations at the hotel by union supporters, which have disrupted guests at the hotel and the adjacent Convention Center,” explains last week’s agenda report.

Further, “several prominent groups that are sympathetic to the union have refused to patronize the hotel, which jeopardizes both the ground rent and Transient Occupancy Tax (“TOT”) revenue ultimately received by the City.”

“Each of you create the ‘face’ of Santa Clara for visitors,” Council Member Pat Mahan told UH representatives. “You do all of those things that make the city’s first impression.”

The Council continued an item about setting up a separate rate structure for electric customers who want to continue to have meters that must be manually read after the city’s transition to smart meters – which automatically “report in” their information via a wireless network. The manual-read program would come at a significantly higher cost to customers who chose it.

Silicon Valley Power’s Ann Hatcher noted that the publicly owned electric utility will store the old meters after the change-over. If there’s any questions, both old and new can be compared. “In fact,” she noted, “a problem with mechanical meters is that they do tend to run slow as they get older.”

Santa Clara energy policy guru, Council Member Pat Kolstad, noted that SVP has been “beyond thorough” in testing the new meters as well as new reporting and accounting systems. “I can’t understand why anybody wouldn’t want to save money for our city.”

We’ll be following up on this story with information and insight about smart meters.

The Aug. 22 meeting was adjourned in memory of Margaret “Polly” Green, mother of the Council’s indispensable Executive Assistant, Kimberly Green; and Carol Resner, retired Chief Dispatcher for SCPD who developed public safety dispatching seminars that are still being used in California.

City Politics
Author Carolyn SchukPosted on May 10, 2017
The Santa Clara City Council voted unanimously on May 9 to schedule closed-session briefings with the Police Chief and to observe Levi’s Stadium public...
SPONSORED