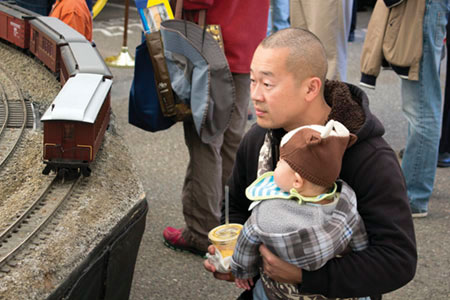 As the oldest continually operated commuter train service on the West Coast, Caltrain continues to grow in the Bay Area. The commuter train, which serves approximately 54,000 riders each weekday, celebrated its 150th anniversary on Jan. 18 with a “birthday party” at the Santa Clara Station.

“On January 16, 1864, the first through trains made the run from San Francisco to San Jose, and reportedly a wild celebration followed,” said Santa Clara Mayor Jamie Matthews who called upon City Historian Lorie Garcia to gather information about the first day of service. “Back then the San Jose Mercury wrote, ‘We hail the consummation of this enterprise as one of the proudest achievements of our state. The time is not far distant when the East shall join hands with the West across the continent and interlock with iron fingers in bonds never more to be disengaged.’ The newspaper’s editor at that time was not engaging in idle prophecy when he wrote, ‘Our people will soon have the opportunity to take the wings of the flying steed, over mountain and valleys, away across vast deserts, and fertile plains, and great rivers. And over this highway of nations – this path of empire – shall come and go the millions of the sons and daughters of freedom.’…From the days of ‘The Valley of Heart’s Delight’ to today, the railroad has spurred growth throughout the entire peninsula, right down to the Santa Clara Valley and beyond. Today, Caltrain continues to connect people to places. We look forward to its continued evolution.”

Many of the speakers gave an overview of Caltrain’s modest beginnings, rise, near-dissolution, and emergence as one of the most widely-used modes of transportation in the Bay Area. Some of the speakers used the opportunity to remind riders that they are tirelessly working to get the high-speed railroad up and running. One of the most anticipated promises, however, came from Caltrain executives, who pledged to the hundreds of guests at the event that they would push toward in converting from diesel-powered trains to a fully electric system; which will cut down travel times, allow Caltrain to put more trains running per hour, and reduce each train’s environmental impact. 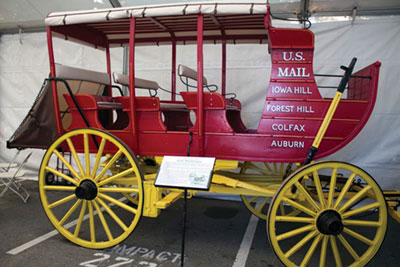 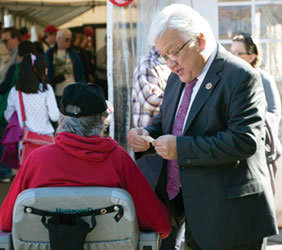 Perhaps the most well-received speaker was former Santa Clara County Supervisor and current executive director of the Mineta Transportation Institute, Rod Diridon, Sr., who came dressed for the occasion in overalls and a denim hat. “The outfit I’m wearing is my father’s,” he said. “He worked on the SP (Southern Pacific) as a freight brakeman from 1938 to 1980. These were his clothes.” He talked about the good and tough times throughout Caltrain’s history – the hard work that went into saving the once-flailing rail system, and the successes that came from saving it. He also gave a nod to Santa Clara’s promise to preserve its history. “Santa Clara’s station is the last of the original stations. The original 1964 station – [it has] never changed, [was] never remodeled, [and is] always protected.”

After the program, which lasted over an hour, guests walked through a 1912 Pullman Company Oregon-Washington Railroad and Navigation (OWR&N) Business Car No. 188, snacked on cupcakes, purchased items from local food trucks, visited the South Bay Historical Railroad Society, and watched a dedication ceremony by the Native Sons of the Golden West.