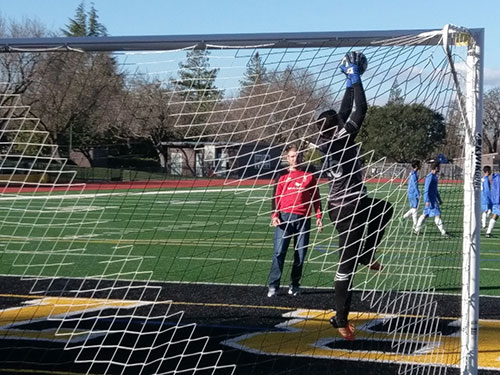 Successive yellow cards given to Santa Clara senior captain Maxwell Howland put the Bruins behind the soccer ball early against the Mountain View Spartans on Tuesday. The Bruins were forced to play the majority of the game with just 10 men due to the early double yellows. Howland’s absence was a big loss as the senior striker showed some nifty moves early, drawing a penalty kick just a few minutes prior to his ejection. Midfielder Jamal Adam would take the PK, but his left-foot shot went off the right post and stayed out. Mountain View would then go on to take advantage of the short-handed Bruins, scoring four goals in the first half in route to a 7-1 blowout victory.

After the game it was still unclear why Howland was given two yellows (resulting in a red card and ejection) instead of just the one yellow.

“The first part of it, I got zero explanation,” commented Bruins Head Coach Joel Denney. “I could go into that a little bit more off the record, but it’s all just opinions.”

It appeared like Howland had been on the receiving end of a relatively hard foul just seconds before being called for a retaliatory shove. The retaliation though did not appear nearly as dangerous as the foul that wasn’t called against the Spartans.  According to Howland, the first yellow was for the foul and the second was for mouthing off to the official.

“I received [the first] yellow for a foul I apparently committed. And then I got frustrated, used some profanity and got a second yellow for that. I kind of have a history for getting yellow cards for my mouth.”

While one yellow card was certainly deserved, the second was extremely questionable. It isn’t very common to see two straight yellows, especially when the original foul committed wasn’t of the dangerous variety.

After the emotional ejection, the Bruins failed to keep calm and composed.  A few minutes later the Spartans would put two quick goals past Bruins goalkeeper Minu Jaeger. Neither of the goals could be blamed on the goalie though. The first came on a tap in goal off a feed through the box that wasn’t cleared by the defense. The second came on an odd-numbered attack with the shot being taken right in front of goal from about 15-yards away.

Later in the half the Spartans would tack on with two more goals, perhaps ones that Jaeger would like to have back. The Bruins keeper got a good piece of a shot that trickled past him for the third goal and bad angle shot beat him low to the near post on the fourth tally.

While the Bruins would only manage to get the one goal, their second half score was a pretty display of soccer. The aforementioned Adam, (a junior midfielder), perfectly placed a deft little through ball allowing senior Alexis Reyes to run onto it and cross it towards the near post. That’s where freshman Jason Teixeira was able to get a foot on it to make the score 4-1.

Despite the lopsided score in favor of Mountain View, it was Bruins midfielders Adam and Ryan Rodriguez who were the most noticeable players on the pitch for either side.

“Ryan just got promoted to varsity last night,” remarked coach Denney. “He’s only a sophomore, so there is a bright future for Santa Clara. There is some definite promise for us moving forward, there are some up and coming players on the JV side.”

“Jamal has been in the starting lineup since day one, he’s a player everyone feels comfortable playing with,” added senior center back and captain Matthew Smith. “The amount of touches he gets, it helps ease off the pressure off the rest of the team. Ryan, like coach said, just got pulled up yesterday, he played great today. I envision in a game or two he will be just like Jamal, everybody will feel comfortable when he’s on the ball.”

It was certainly tough task for Smith to keep his squad upbeat as the only remaining captain after Howland was forced to exit the game early. With the team letting up two quick goals after going down to 10 men, there seemed to be a bit of finger pointing going on. Smith did his best to try and keep everyone in check as the leader on the field.

“Especially when [Howland] goes off the field, being the only captain left, you have to step it up another notch,” remarked Smith. “When there is two of you [then maybe] you slack off in your leadership. But when there is only one of you, you always have to be on top of things. When he goes off, I have to increase my communication.”

The score may look like the Spartans were the superior team, but this game could have gone much differently if not for the controversial red card.

Pedal to the Metal: Santa Clara Cruises to Another Win

Sports
Author Andrew BenschPosted on July 12, 2017
Less than a week after limping off the mound in Westside’s previous victory on Monday, starting pitcher Jayce Dobie returned to the mound once...