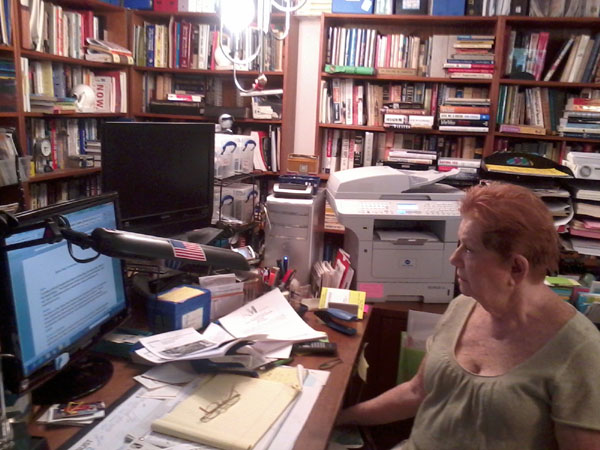 In our media saturated age, some people still believe that grassroots campaigning can elect candidates. One of them is Santa Claran ArLyne Diamond; a long shot candidate for the California State Assembly who’s already beat the odds with her second-place finish in last June’s open primary.

Running to represent District 25 – newly created by 2011’s redistricting – Diamond, a Republican, faces sitting Fremont Assemblyman, Democrat Bob Wieckowski, who was redistricted out of his seat in District 20.

Facing a candidate with a formidable war chest of corporate and union money, Diamond says her campaign to date has been funded with hundreds of small donations – typically under $100.

“Conventional wisdom says I can’t do this,” she laughs. And then goes right on doing it, keeping a schedule that is exhausting just to think about. “I’m my own campaign manager, event planner, communications director – you name it.”

On any given day of the week she’s speaking at a service club luncheon, then rushing off to attend a Q&A with a local business or community group, and finishing the day with a social event at a non-profit or political club.

Since June, she’s crisscrossed the district, visiting service clubs, Chambers of Commerce, local non-profits, and political and social events. She’s also breaking with conventional wisdom by crossing party lines. Her supporters include both Republicans and Democrats, and she’s been lobbying local Democratic as well as Republican groups for opportunities to speak at their events.

ArLyne Diamond and Bob Wieckowski will be on the panel at the Fremont, Newark and Union City League of Women Voters’ Candidates Forum on Thursday, September 20 from 7:00 to 7:45 p.m. at Fremont Unified School District Board Room, 4210 Technology Drive in Fremont. Visit www.lwvfnuc.org or call (510) 794-5783 for information.