U.S. Army veteran Astro “Al” Tortolano, 97, was and is one of the few survivors of WWII’s “Lost Battalion.” The rescue of the Texas battalion while trapped by German troops in the Vosges Mountains of northern France is a legendary WWII story.

To honor the Santa Clara resident for his life-long service to his country, community and fellow veterans, Santa Clara American Legion Post 419 named its Legion Hall after Tortolano at a ceremony on Feb. 16. He is the recipient of the Bronze Star, Purple Heart and other medals.

“We’re very honored with this,” said Tortolano’s daughter, Rosanne Tortolano, who was so moved it was difficult for her to speak. “My father is not one to look for recognition. He just likes to do for others. I’m so proud of him.”

Her father had planned on attending the ceremony, but a last minute health concern prevented his doing so. His wife, Alice, also was unable to attend.

Ret. Pfc. Tortolano served from 1942 – 1945 in the 1st Battalion, 141st Regiment, 36th Infantry Division of the U.S. Army. The 1st Battalion is remembered as the “Lost Battalion.” Then numbering about 270, it was stranded on a mountain ridge, surrounded by German soldiers, in October of 1944.

Attempts to rescue the 1st Battalion by two other 141st Regiment battalions had failed. They were low on food, water, medical supplies and ammunition.

“About the only thing you could think of was family. Will I ever see my family again?” remembered Al Tortolano in 2009 at a ceremony in Texas, commemorating the 65th anniversary of the battle to save the Lost Battalion.

Then, against the odds in one last effort, two battalions of the U.S. 442nd Regimental Combat Team succeeded in rescuing the Lost Battalion. But the cost was great.

According to historian and author James M. McCaffrey, the 442nd combat team suffered 37 deaths and 410 casualties in the fierce five-day battle. They rescued 217 men in the 1st Battalion of the 141st regiment. Tortolano was one of those rescued.

The 442nd team was made up primarily of Nisei — second-generation Japanese Americans.  It became the most decorated unit in U.S. military history. Yet even as they fought, their families were falsely imprisoned in U.S. internment camps.

“[The Nisei] were sent into some battles other (units) wouldn’t go to,” said Al Tortolano in 2009. “In some ways they were treated as second-class citizens. But they proved they were true Americans.”

The American Legion ceremony honoring Tortolano opened with the Presentation of Colors by Santa Clara University’s Army Reserve Officers Training Corps. They were accompanied by the Post 419 Honor Guard.

The Spirit of ’45, an organization to record and keep alive the stories of veterans, presented a video about Tortolano’s service. All veterans present were recognized with applause.

Legion Post 419 unveiled a plaque honoring Tortolano. He was lauded for his advocacy for veterans, especially for disabled veterans and their families.

“Al held many positions with the DAV (Disabled American Veterans). He was quite an advocate for veterans,” said Post 419 Master of Ceremonies Don Newton. 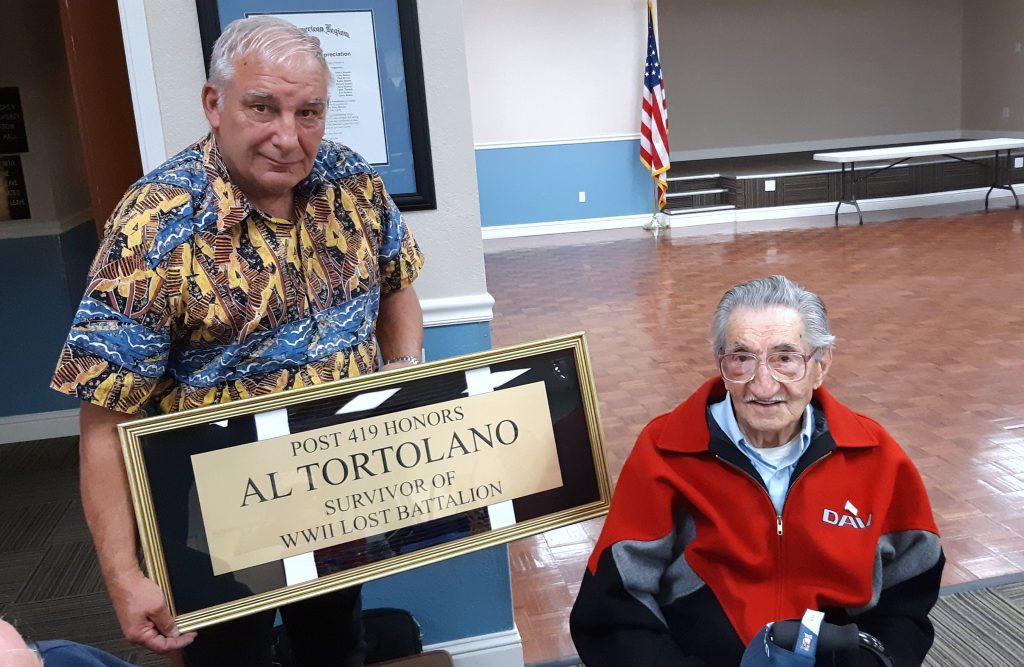 Santa Clara American Legion Post 419 member Rich Frazier (left) presents a plaque to Ret. Pfc. Astro “Al” Tortolano, 97, at a Disabled American Veterans meeting on Feb. 26. Post 419 named its Legion Hall after Tortolano, a survivor of WWII’s Lost Army Battalion, at a Feb. 16 ceremony, but Tortolano was unable to attend the ceremony because of a health concern.