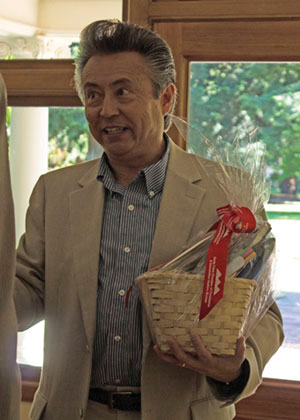 It ended in the exact same place as it began. Twenty-eight years ago, in 1984, a young George Rivera walked into the Jamison-Brown House ready to embark on his career with the Triton Museum of Art. On June 27, Rivera returned, back to the same spot where he began his career in Santa Clara for a retirement celebration.

When Rivera started at the Triton, the facility at 1505 Warburton Ave. hadn’t been built. During construction, he would video tape the builders at work – although those tapes have since been lost. When the museum’s current location opened in 1987, Rivera was there.

“The other day I showed the staff where we hung the first painting in the museum,” he said, “because I’m the only one left from those days.”

For nearly three decades Rivera helped bring the best artists in the Bay Area – and in some cases the entire state – to Santa Clara. Additionally, he’s been an educator at local colleges, including Mission College, for over 27 years; and, although he’s retiring, Rivera isn’t retired – he will continue to teach at the collegiate level. But, don’t think his trademark pompadour will be completely missing from the museum. Rivera’s wife, Kristin Lindseth-Rivera, will remain a Triton faculty member.

“I’m hoping that in addition to teaching classes at Mission, I’ll be able to teach some classes at the other colleges and teach full-time,” said Rivera. “Kristin will still be teaching here and maybe in the winter I’ll do one of those weekend figure painting workshops [at the museum].”

Even though Rivera was all smiles at his party, he spent the past week on an emotional roller coaster. Part of that was making sure he let his now-former staff know how he felt about them. “I told each one, little by little, how important they were,” he said.

When it comes to the Triton’s future, Rivera has a recommendation. He believes Acting Executive Director Jill Meyers is the perfect person to fill his shoes. “I hope the board sees her qualities and I hope they make her the full-time director.” That pretty much sums up the man who helped make the museum – he’s always concerned about those around him.

Community
Author Cynthia ChengPosted on March 10, 2017
“When you have snot in your nose and you blow air from your nose, the mucus traps the air and forms a bubble,” said...

Community
Author Susan HarrisPosted on August 23, 2017
With the Great American passing over the City, Santa Clarans made sure they would see it. Eclipse viewing parties took place across Santa Clara....
SPONSORED