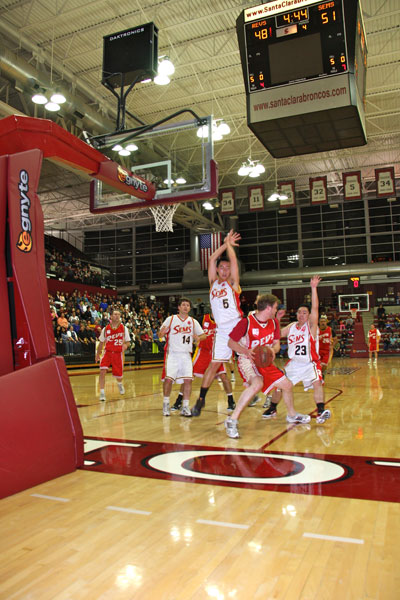 Parishioners from across the Bay Area filled the lower section of Santa Clara University’s Leavy Center February 3 for the sixth annual Priests (Revs) versus Seminarians (Sems) basketball game to benefit seminarian formation in the Diocese of San Jose.

Going into this year’s event, the series was 3-2 Revs. The Sems, were determined to continue their winning streak after beating their ordained counterparts 50-42 last year.

The crowd was treated to a welcome address from Most Reverend Patrick J. McGrath, Bishop of San Jose. “I’m amazed at how you have continued to support this. I’m even more amazed that we have not been raided by the police,” said McGrath to laughs from the crowd. “Also, I’d like to make just a couple of announcements. The Seminarians, I’m always amazed at how they care for and look out for the Priests, have asked that all of you, if you would please, turn off all of your cell phones and any other electronic devices because they’re afraid that it may interfere with the pacemakers [of the Priests]. I want to also assure the Priests that I have followed up on their request that all of the Seminarians have been frisked before they came into the stadium and all of the tasers have been taken away from them. So, the Priests are all safe. Also, the Seminarians, again, always concerned with the Priests, asked that I notify O’Connor Hospital and ask that they have the resuscitation team here in case it’s needed for the Priests. And I want to tell the Seminarians that I listened to your mothers when they asked that I speak with the Priests and ask them to be gentle with you. I’ve done that and they have been very, very accepting.” McGrath wrapped up his address and stepped aside to allow Saint Patrick Seminary and University Schola perform the National Anthem and Salve Regina humnprior to tip off.

While it seemed like most of the crowd was on the Priests’ side, the Seminarians kept control of the ball throughout most of the game and at many points it appeared as if they were going to run away with their second consecutive victory. But, within the last five minutes, the Priests made a hard push for victory, tying the score at 51 with four minutes to play.

In the final minutes, the Revs and Sems traded leads, until, with one minute remaining, Father Stasys Mikalonis of Saint Elizabeth Parish, aptly wearing number 23, drove toward the net, shot and made the basket. Unfortunately, Mikalonis committed a dreaded offensive foul and the basket was not counted. The foul provoked boos from many in the crowd. Mikalonis’ drive was the last great chance for the Revs to tie up the game. And, with 4.8 seconds on the clock, the Sems had locked up a three point, 62-59 lead. The Revs had one shot to send the game into overtime, but the team came up short.

The series will be all even going into next year’s game. Father Steve Kim of Saint John Vianney Parish was crowned the 2012 MVP for the Revs, while Brother Matthias of the Immaculate Heart was given the honor for the winning Sems team.

For more information on the Diocese of San Jose visit www.dsj.org.