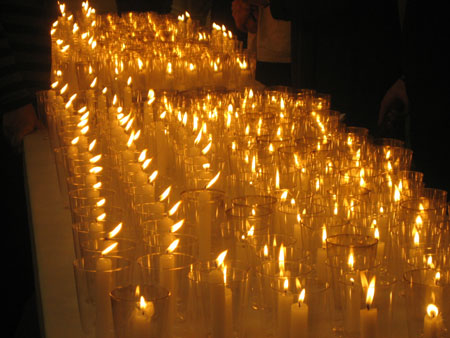 On Tuesday morning September, 11, 2001 founding director of American Muslim Voice (amuslimvoice.org) Samina Sundas was shopping in Costco, when she first saw the TV news about the World Trade Center Attack. Shocked by the carnage and destruction of that day, she began to cry.

Ten years later, Sundas still remembers her answer like it was yesterday. “Sir,” she replied quietly, “I haven’t lived long enough not to care what happens to other people.”

On September 11, 2011, Sundas told this story to a gathering of about 500 people from across the Bay Area, at a commemoration of the 10th anniversary of 9/11 at the Santa Clara-based Muslim Community Association (mcabayarea.org) jointly sponsored by the American Muslim Voice, MCA, and Northern California Islamic Council (norcalcouncil.org).

Titled, “From Fear to Friendship,” the event honored those who died and suffered on 9/11 by fostering understanding and friendship across the community. “As we come together as a community, this represents the best of who we are as Americans,” Santa Clara City Council Member Jamie Mcleod told the diverse gathering.

“We have all, as a community, Muslims and non-Muslims, have suffered over the last ten years,” said San Jose native Imam Tahir Anwar. “Islam is a religion of life and it’s about bringing people together as a community. We cannot control the circumstances that we face, but we can control how we face them.”

The evening’s keynote speaker was Rev. James Lawson, an iconic figure of the mid-20th century civil rights movement. A mentor of Dr. Martin Luther King Jr., Lawson was called by King “the leading theorist and strategist of nonviolence in the world,” and helped coordinate the Freedom Rides in 1961 and the Meredith March in 1966.

After 25 years as pastor of Los Angeles’ Holman United Methodist Church, Lawson retired in 1999. Since then he’s served as president of the LA chapter of the Southern Christian Leadership Conference (sclcnational.org), chairman of Clergy and Laity United for Economic Justice (cluela.org), and a founder of Interfaith Communities United for Justice and Peace (icujp.org).

His 83 years may have whitened his hair and slowed his step, but they haven’t taken away any of Lawson’s power as a speaker. Indeed, today’s pussyfooting public rhetoric is anemic in comparision.

“The task has only begun,” he continued. “We must allow our words, deeds and lives to sow the seeds for a 21st century of peace and justice, a 21st century movement of non-violent direct action. Only if that happens will the world be able to heal and find its true soul. We do not bless our nation if we are not willing to bend our lives to mend its flaws.”

The evening concluded with the lighting of candles for all the victims of 9/11 and St. Francis of Asissi’s moving prayer: “Lord, make me an instrument of Thy peace;?Where there is hatred, let me sow love… Grant that I may not so much seek… To be understood, as to understand;?To be loved, as to love.”

On February 19, 2012 Nihonmachi Outreach Committee will hold a day of remembrance of a different sort at the San Jose Buddhist Church Betsuin: the 70th anniversary of the internment of Japanese-Americans in prison camps during WWII.

Among those “rounded up” as presumptively seditious was Santa Clara’s congressman, Mike Honda, who was in diapers at time. The church is at 640 South 5th St in San Jose. For more information, call (408) 374-2722 or email info@sjnoc.org.

Find out for yourself what Muslims believe and practice at the MCA’s latest Discover Islam program – a lively two-month series featuring plenty of opportunities for questions and in-depth discussion. Coming up: Prophet Muhammad on Sept. 19, the Quran on Sept. 26, Social Justice in Islam on Oct. 3, and a panel discussion, “Be In This Life A Traveler,” on Oct. 10.

Back in Time at the Harris-Lass House Museum Movie Night

Community
Author Diane AndrewsPosted on June 24, 2022
It was Father’s Day and 96-year-old—on June 29—William (Bill) Reed and his son Patrick Reed reminisced as they walked around the lot behind the...