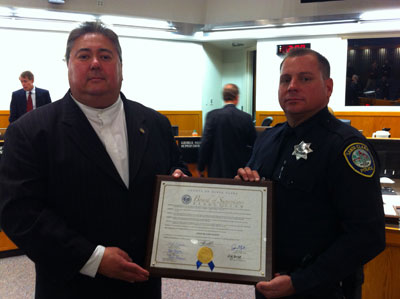 Last December, Officer Gratny was the first one to arrive at a residence where the occupant reported suspicious activity on his roof. Shortly after his arrival, Officer Gratny heard “shots fired” coming from the backyard of the residence. As other officers secured the area, Officer Gratny made telephone contact with the distressed subject who was shooting at imaginary assailants. During their conversation, Officer Gratny developed rapport with the individual and eased the tensions surrounding the incident. Despite the suspect’s reckless discharge of a firearm, Officer Gratny’s CIT training and teamwork resulted in taking the suspect into custody safely.

Officer Gratny is a veteran Santa Clara Police Officer. He was a Santa Clara Police Reserve Officer from 1994 to 1995 and hired as a full-time Officer in 1999. Officer Gratny also served for 24 years as a Navy Corpsman with the United States Marine Corps. Eight years ago he received CIT training and is known for his exemplary skills as a crisis negotiator on the Police Department S.W.A.T. Team.

CIT training is a nationally recognized model for expanding law enforcement response to people who are in crisis or otherwise unstable. Police officers receive practical awareness training which is intended to reduce injuries, increase access to services for the mentally ill and their families, and reduce the stigma associated with mental illness. The Santa Clara Police Department is committed to CIT training for its personnel, and we are proud of Officer Gratny’s recognition.