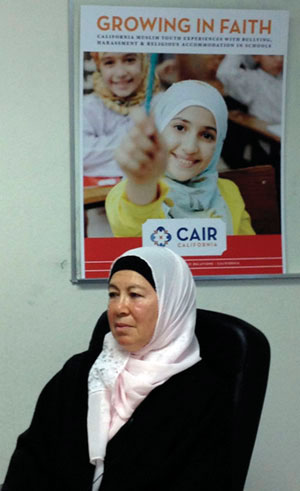 The Council on American-Islamic Relations (CAIR) released a groundbreaking report on bias-based bullying of American Muslim students within the state of California on Dec. 19.

The report, “Growing in Faith: California Muslim Youth Experiences with Bullying, Harassment and Religious Accommodation in School,” which is the first of its kind, details the experiences of 500 Muslim students aged 11 to 18.

The good news is that 80 percent of students agree or strongly agree with the statement, “I am comfortable participating in class discussions about Islam or countries where Muslims live.” Likewise, 83 percent felt confident letting students know they were Muslim.

“Being called a ‘terrorist’ or ‘Bin Laden’ is still a reality for many American Muslim students,” said CAIR-LA Civil Rights Manager Fatima Dadabhoy. “Throughout the course of this study, we were alarmed to find that many Muslim students didn’t even deem this as a form of bullying. Through this report, we hope to show that a decision to dismiss mistreatment as a natural consequence of being Muslim in America, or simply part of growing up, is unacceptable and normalizes a toxic school environment.”

What was clear from the report is that most bullying goes unreported. Forty-two percent of students surveyed said they never reported instances of bullying to a teacher or principal, while 31 percent refused to tell their parents. In both instances, there was a high percentage of students (26 and 27 percent, respectively) who declined to answer the question.

“Too often we find that parents and teachers don’t know how to adequately address bias-based bullying of American Muslim students,” said Rachel Roberts, civil rights coordinator for CAIR’s Northern California offices. “We hope this report will shed light on the resources available to parents, teachers, and students in order to effectively and proactively address school bullying.”

In order to further the conversation, and to help give parents, teachers and administrators some direction on how to address bullying, CAIR gave a list of website resources on the prevention of bullying and listed the educational codes within the state and federal laws relevant to bullying and harassment.

The report concluded that while many American Muslim youth have positive experiences in public schools it was “important for American Muslim students to know and effectively assert their rights on campus and, more importantly, for educators to know their responsibilities to ensure a safe and tolerate environment for everyone.”

Community
Author Melissa McKenziePosted on April 11, 2018
The family-run Puesto restaurant chain, which rapidly found an audience with its modern Mexican cuisine and unique taco offerings in Southern California, will open...

Community
Author Diane AndrewsPosted on May 18, 2011
Lapidaries at the Santa Clara Senior Center leave no stone unturned as they cut, shape, smooth, and polish rough stones, transforming them into decorative...
SPONSORED