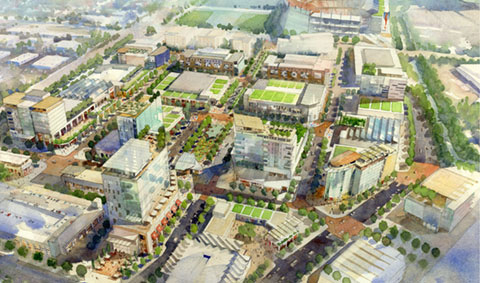 A whole new Santa Clara is taking shape north of Highway 101, starting with the Levi’s Stadium opening later this year, and continuing with two significant new developments on Tasman that will start to take shape this year – Centennial Gateway and City Center Santa Clara. So we thought to start off the New Year, it’s appropriate to review these two projects, their history, and the design principles that the Santa Clara City Council has established for their development.

Almost a year later, in April 2013, the Council approved another ENA, this time with Related California (part of the international Related Companies) for the development of city-owned former landfill that is currently home to the municipal golf course and PAL’s BMX track.

Starting in October of last year, the two companies shared their development concepts in a series of public study sessions. In December the City Council approved a set of design guidelines for the developments, and is working with the two developers toward term sheets and Environmental Impact Reports (EIRs) that will allow the projects to be built.

“Combined, the two projects will create a new commercial and entertainment oriented district in Santa Clara that will redefine the area and provide a regional attraction,” according to the Dec. 3, 2013 Council meeting agenda report.

Although the two proposals are separate projects, their proximity offers plenty of potential synergy between the two, and dictates cooperation between the developers. “We felt it was needed to master plan the area,” Santa Clara City Manger Julio Fuentes said at an Oct. 30, 2013 study session.

The developers, said Fuentes, have designed a total project that’s a “city within a city.” The combination of integrated retail, entertainment, and new office and residential development will “add a component we certainly need in the city. It will be a signature development.” With the city’s huge daytime population of office workers, the new development would offer opportunities for them to eat lunch and shop in the city – which directly brings Santa Clara sales tax revenue – as well as providing evening and entertainment destinations that keep convention center visitors in Santa Clara.

Not only will the area become a magnet for visitors to Santa Clara, said City Council Member Teresa O’Neill. “It’s also our opportunity to create a blueprint for smart development offering a variety of transit options, and provide significant new options for people to live close to where they work.”

The value of this proposition is clearly understood in San Jose, where, in addition to its high-density downtown office residential development, the San Jose Cultural Affairs office actively subsidizes and promotes cultural events, performances and entertainment to keep visitors and workers downtown in the evenings. 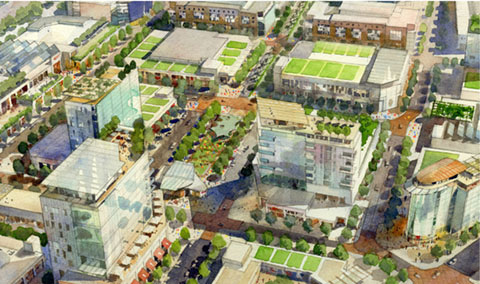 “It is the City’s goal to ensure that both developments are successful, complement each other, and are major contributors to successful development of the City,” said the Dec. agenda report. “The land of these sites and numerous other sites within the area is owned by the City of Santa Clara, giving the City a significant role in the successful future of the developments.” To ensure the critical inter-relationship of the projects, the City hired urban design firm Field Paoli Architects specifically for site plan coordination.

The design guidelines the Santa Clara City approved last year focus on several different aspects of the developments: visibility, access, scale of development and urban character of the streets, buildings and public area in the overall development.

Urban Character And Identity: Tasman Drive and Centennial need to be signature streets, designed to accommodate many people daily and for special events. Sidewalks on both sides of Tasman and Centennial must be at least 30 feet. Views, signage and lighting all need to be significant and “branded” based on a master design template, and subject to approved by the city. Floor area ratio (a measure of density) is 2.4 in Centennial Gateway and 1.77 in City Place.

Access And Circulation: Three vehicular access points are needed to and from Tasman between San Tomas Aquino Creek and the Amtrak/ACE railroad – on Centennial, to Stars and Stripes at the Railroad Station, and one to the east side of the Tasman parking garage. A street is needed east of the City parking garage, connecting Tasman with Santa Clara City Place, and a straight walkway at least 60 feet wide is needed mid-block between Centennial and the Railroad, connecting Tasman to City Place. Stars and Stripes will be needed as a service street for blocks north of Tasman, and a major access to the City garage. Bridges over Tasman and Centennial should not be permitted.

Development Patterns: Blocks between Tasman and City Place will be roughly rectilinear, no longer than 400 feet, and no wider than 300 feet. This will require realigning Stars and Stripes near the railroad tracks.

Land Uses And Parking: Retail, restaurant and entertainment must be arranged in ways that are continuous and complementary, and benefit from the areas pedestrian nature and development scale. Parking must be provided on-site according to city zoning ordinance, by use and by development.

Several Studies will also be needed to identify area needs and plans for future construction before any development gets the go-ahead: