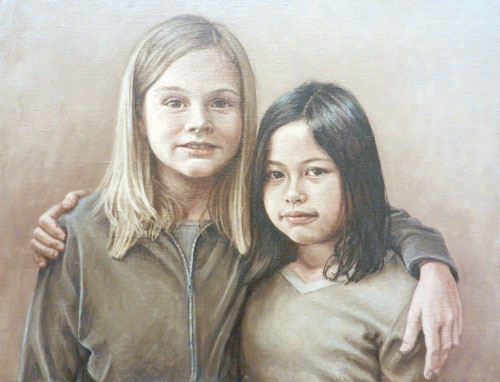 On the heels of the Triton Museum of Art’s portrait exhibit by 2012 Statewide Painting Competition and Exhibition winner Cuong Nguyen, the museum brings a similar exhibit to visitors – “Portraits: New Work by Donna Cehrs.”

While some may think two portrait exhibitions so close to each other is too many, Cehrs’ work is quite different from Nguyen’s. While Nguyen impeccably paints the human form on medium and large canvases, Cehrs’ exhibit is almost entirely of extremely detailed mini portraits.

Nearly all of Cehrs’ portraits of one person could fit inside an index card, and many of her portraits of two people aren’t much larger than a postcard. Yet, none of the facial or image detail is lost. Interestingly, all of the subjects are children or adolescents and most of them are not smiling. In fact, many stare blankly at the viewer. Just about every one of Cehrs’ paintings is also in monochromatic tones. The combination of sepia-colored images and nearly expressionless children can make the viewer slightly uncomfortable, or saddened, as children are often seen with beaming smiles and in bright, colorful settings.

Cehrs utilizes her artist statement to explain her choice of subject matter and use of expression. “It took me some time…to figure out whom I might paint and how. The nine and ten year old students in my art classes were the most available and appealing subjects at hand so that is where I began. I felt like I had, and still have, so much to learn about the human face and head…After painting young children for some time I began to notice photos of other young people in the newspaper, some only about eight to 10 years older, but in very different circumstances. These were mug shots and I was intrigued to see what it would be like to paint from them, what kinds of expressions I might discover in these young adult subjects. The range and complexity of emotions I find in them makes them compelling, but sometimes difficult to work on. I often need to return to painting the younger children as a relief and for a glimpse of hope.”

“Portraits: New Work by Donna Cehrs” is on display at the Triton Museum of Art until January 27. The Triton is at 1505 Warburton Avenue and is open Tuesday through Saturday from 11 a.m. to 5 p.m. and Sunday from noon to 4 p.m. The museum is open until 8 p.m. the third Thursday of the month and is closed on Monday. For more information on Cehrs’ exhibit visit www.traitonmuseum.org/exhibitions_Cehrs.php.