Over the weekend the Santa Clara police union did some campaigning for Measure C via a text message push-poll — campaign advertising under the guise of an opinion poll.

The “questions” told voters that Measure C would create election districts — clearly untrue because Santa Clara already has election districts ­— that the 49ers had donated money to the No on C campaign, that Mayor Lisa Gillmor supported Measure C, and then asked questions like, “Now that you’ve learned a little info, how do you feel about Measure C?”

To round out the campaign’s window dressing as a public opinion poll, the campaign also asked about voters’ feelings about a general obligation bond/parcel tax for the Santa Clara police department, their opinions of the police union, and their perceptions of the credibility of The Silicon Valley Voice and of a City Hall-aligned political blog that was created in 2016 at the behest of Mayor Lisa Gillmor and Council Member Teresa O’Neill. 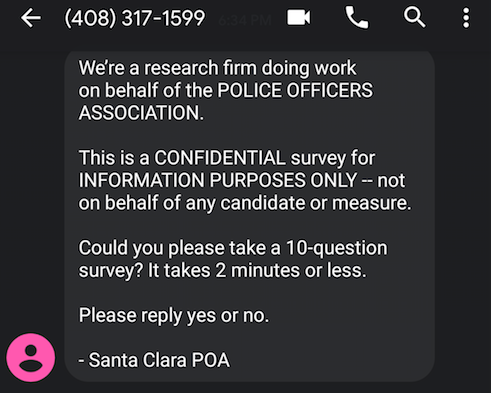 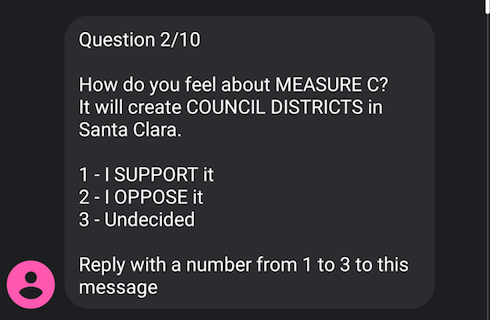 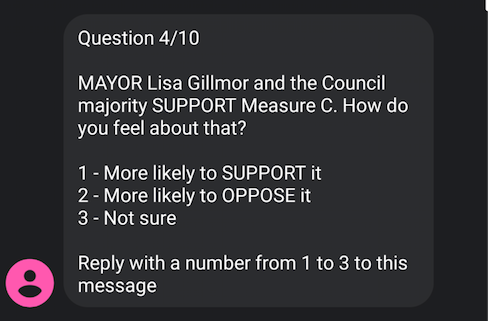 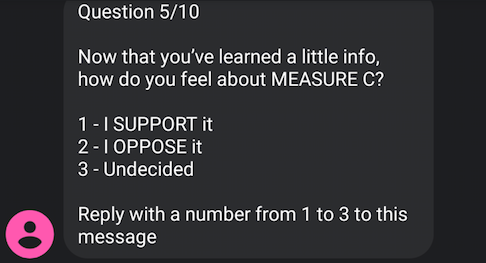 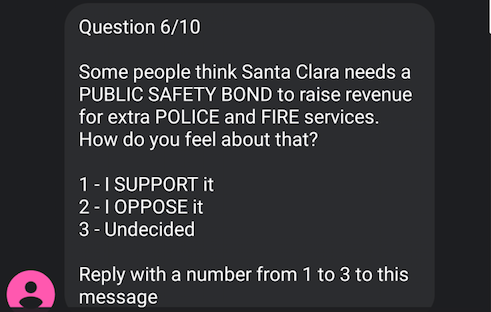 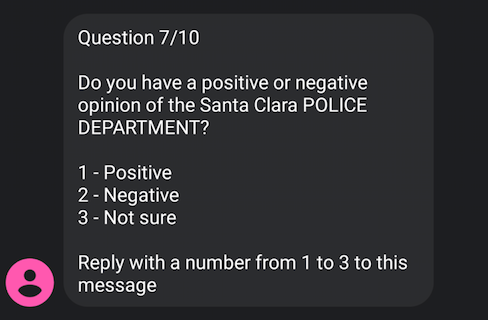 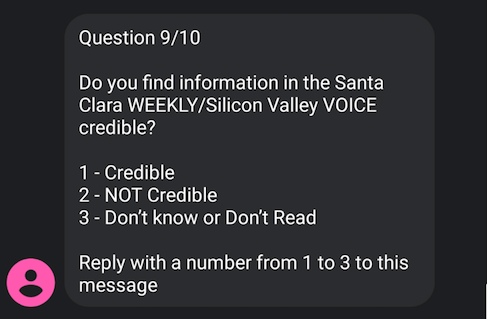 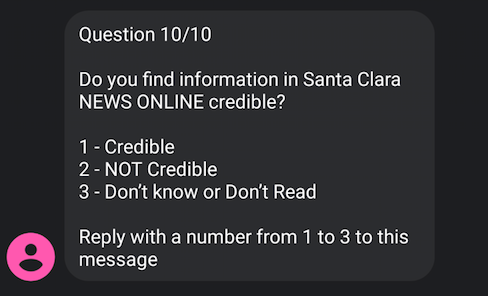 Measure C asks voters to reduce the six districts to three in 2022, each with two seats elected at-large. The judge’s order only specified the 2018 and 2020 elections, leading some — including City Attorney Brian Doyle — to conclude that Santa Clara is free to do something else after 2020.

The City Council put Measure C on the ballot after it was proposed by a Council-appointed committee  — all but one of whose members were white — whose assignment was to write a charter change to elect the Council by single-member districts. Only two committee members opposed the three-district scheme, which was conceived by a sub-committee that didn’t publish minutes of its deliberations.

Although it hasn’t yet received any outside donations in this election, the police union PAC has, since 2016, operated as a gray money PAC ­— independent expenditure money that travels through nesting PACs to obscure its source.

Barry’s financial relationship with the police PAC goes back at least since to 2016, when Nikolai paid $10,000 for Barry’s campaign-in-a-box software, VoterPros. That year Barry was also an advisor to Gillmor’s and O’Neill’s behested political blog. Nikolai has been on-and-off president of the police union for much of the last 17 years.

Back in 2010, Barry was hired by the Yes on Measure J committee — headed by Gillmor — to bring the pro-stadium measure across the finish line.

City Politics
Author Carolyn SchukPosted on November 25, 2022November 27, 2022
Earlier this month there was a flurry of consternation when a council member’s ballot was rejected because of a signature discrepancy, and mutterings about...

City Politics
Author David AlexanderPosted on November 18, 2022
It was almost paint-by-numbers during a Santa Clara City Council meeting responding to findings of the civil grand jury report that alleged the Council...
SPONSORED